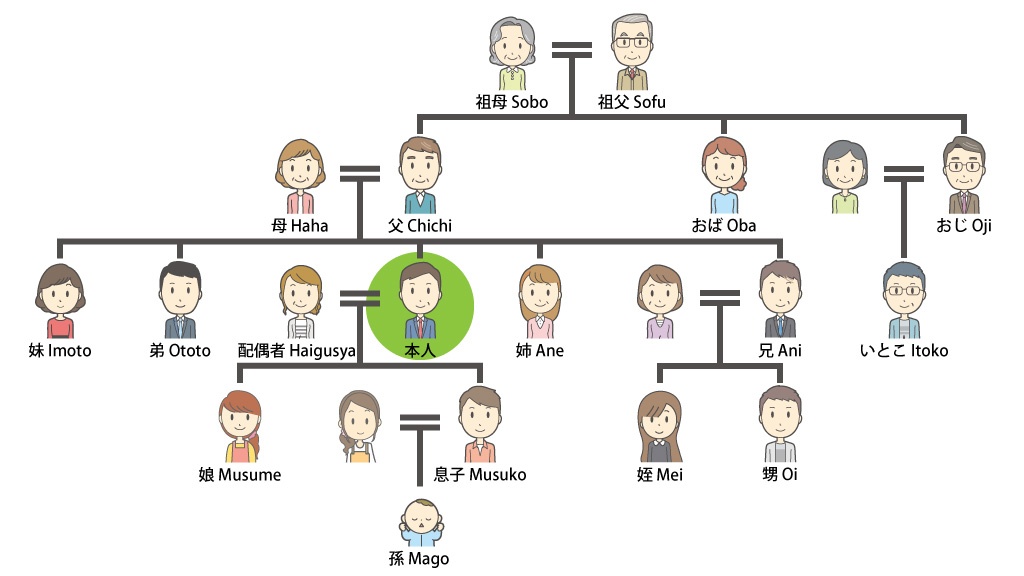 Under Japanese law, people who we are related to by blood or marriage are referred to as “親族 Shinzoku”. “Shinzoku” is a word defined under the law.

There are words with similar meanings to “Shinzoku”, such as “親戚 Shinseki”, “親類 Shinrui”, and “縁者 Enja”. Among these, very close “Shinseki” may be referred to as “身内 Mi-uchi”, and the group you are most closely related to by blood, such as “married couple and children” are called “家族 Kazoku”.

In this way, there may a variety of names and appellations for people within the same “Shinzoku”. This time, I will introduce you the main names and ways of calling people in your “Shinzoku”.

Basic rules when referring to people

When you address somebody in your own “Shinzoku” who is above you in station, you use the “Shinzoku” appellation of “Oto-san” or “Oba-san”. In Japan, there is the idea that “calling people directly by their names is rude”, so it is unusual to call people in your “Shinzoku” who are above you in station by their first names. There are a variety of appellations used, and the ones used differ according to family, age, gender, region, and relationship with the other party.

When addressing your spouse’s “Shinzoku” or the “Shinzoku” of the person you are speaking to, you would tend to use polite appellations, such as “さま Sama”, or “さん San”, i.e. “Oto-sama”, “Oba-sama”.

These are general names for your father and mother, but they also include adoptive parents and remarriage partners of your parents.

The child of your own child

“The appellations for Shinzoku” used in Japan are not only the ones we have introduced on this occasion.

What is important to note is that it depends on “who is the basis for describing the relationship”. For example, say that you have two sons. In this case, many families use the youngest child as the reference point and the parents refer to even their own child (oldest son) as “Oni-chan”. Additionally, at the kindergarten where your children, the mothers of the other children may use the child as a reference point and call you “OO’s mama”. If a grandchild is born, the grandchild may be used as the reference point, and you may be called “Ojii-chan” or “Obaa-chan” by your own children.

You should bear this in mind, and slowly get used to the situation.