What is a yukata? Explanation of their features, how to wear them, and how they differ from a kimono 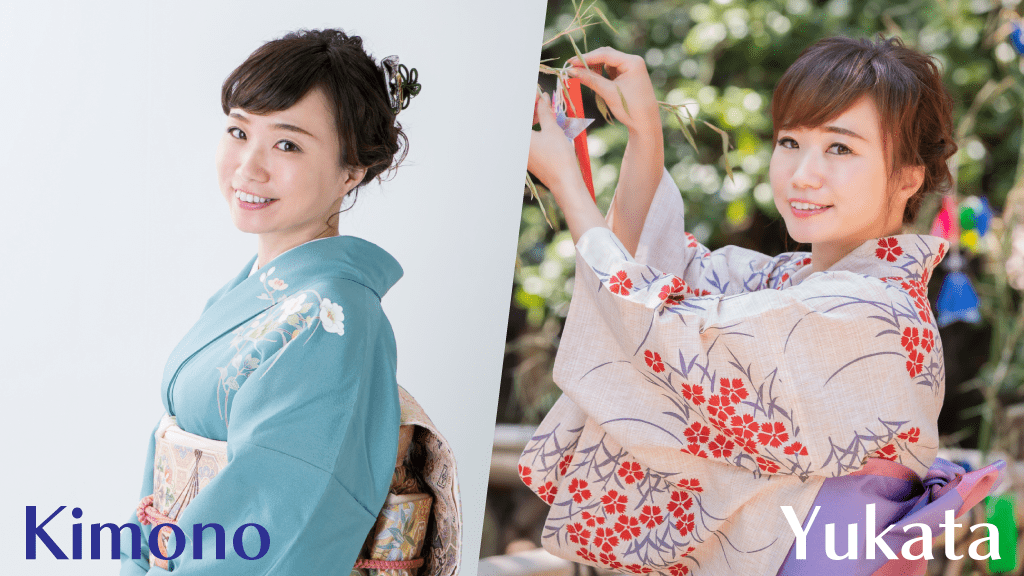 The kimono is the national dress of Japan. There are various types of kimonos, each with its own ranks. For example, the “Uchikake” at wedding ceremonies is formal attire for special occasions only. On the other hand, most casual kimono is “Yukata.” When summer comes around, yukata is worn by people at firework events and summer festivals.

On this occasion, we will introduce the yukata. You might also like to look at “Types and Characteristics of Kimonos” for reference.

The origins of the yukata are said to be the “Yucho”, which was a yukata worn in the Asuka period and the”Yukatabira”, which was worn during the Heian period. It was a garment made of linen and worn by the nobility to avoid steam burns when taking a steam bath. In the Edo period, public baths and cotton became widespread, and people began to wear them after bathing, like bathrobes. Following this, it was worn as sleepwear until western clothes grew in prominence. Currently, people may have a yukata for after their bath, and other yukata used for going out.

Yukata for after taking a bath

Hotels and onsen ryokans rent out yukata for use after bathing. These are also referred to as “Ryokan yukata”. They can be used as loungewear when moving around the ryokan or as sleepwear . The fabric is thin and soft, and they are easy to put on by oneself by simply tying a thin Obi (sash). This type of yukata is not expensive, and many people purchase them as souvenirs or for home use.

How they are worn by men

How they are worn by women

Yukata for going out

Yukata for wearing outside are often seen at fireworks meetings and summer festivals. Clear and vivid patterns and colors are used. It may be difficult for you to put them on by yourself. When renting yukata, you should ask them for “Kitsuke” (help with putting it on).

How they are worn by men

How they are worn by women

Differences between yukata and kimono

What is the difference between yukata and kimono other than yukata?

When and where do you wear them?

The yukata for wearing after the bath is the same for all seasons. Basically, you would never wear this to go out with.

The yukata for going out is limited to summer (June to August).  You can wear it for casual scenarios, such as firework events, summer festivals, and casual meals, etc.

Select the appropriate fabric, tailoring, and pattern of the kimono for the season. There are different types of kimonos, such as for formal wear, for going out, and for daily wear, and the type of kimono is determined the occasions and places where they can be worn.

What are the materials?

As the yukata is worn in the hot summer, thin, breathable cotton, linen, and cotton/linen blends are often chosen. They do not have a lining. Recently, yukata made of polyester are often seen. This material is highly colorful, water absorbent and quick drying.

Silk, cotton, and wool are often used for kimono. As the grade is determined by the way the fabric is dyed, woven, and patterned, each has its own rules for use.

Ways to wear and ornaments

A main difference between a yukata and a kimono is whether “Nagajuban” (long underwear) are used or not. The “Nagajuban” is worn between the kimono and the “Hadajuban” (underwear for kimono). This inner garment, which is partly visible through the collar and sleeves, is worn to prevent the kimono from getting dirty. A small piece of cloth called a “Han-eri” is sewn onto the collar of the long underwear to prevent it becoming stained. By replacing it when it gets dirty, the “Nagajuban” is used with care. It is also a fashionable accessory for the collar.
In the case of yukata, you put on “Hadajuban” or underwear before putting on the kimono. No “Nagajuban” is worn. In terms of footwear, you should be barefoot and wear “Geta” (footwear for daily use).
In the case of kimono, you wear “Tabi” (socks for use with kimono) before putting on the “Hadajuban”, “Nagajuban”, and kimono in that order. Footwear such as “Zori” (higher rank footwear) are worn.

The obi on the kimono and yukata are worn differently.
The obi of the yukata is thinner and shorter than that of the kimono, and easier to tie.
The kimono obi is thick and long. There are different obi to use and different ways to tie them, depending on the kimono and its purpose. Small items, such as “Obi-age”, “Obi-jime”, and “Obi-dome” are also used.

The yukata is a type of kimono. If you would like the “Challenge of wearing a kimono”, you should definitely try wearing a yukata in the summer. If you hire them from rental stores, you can try many different patterns as well as experiencing “Kitsuke”.