Types of Sushi and Its History 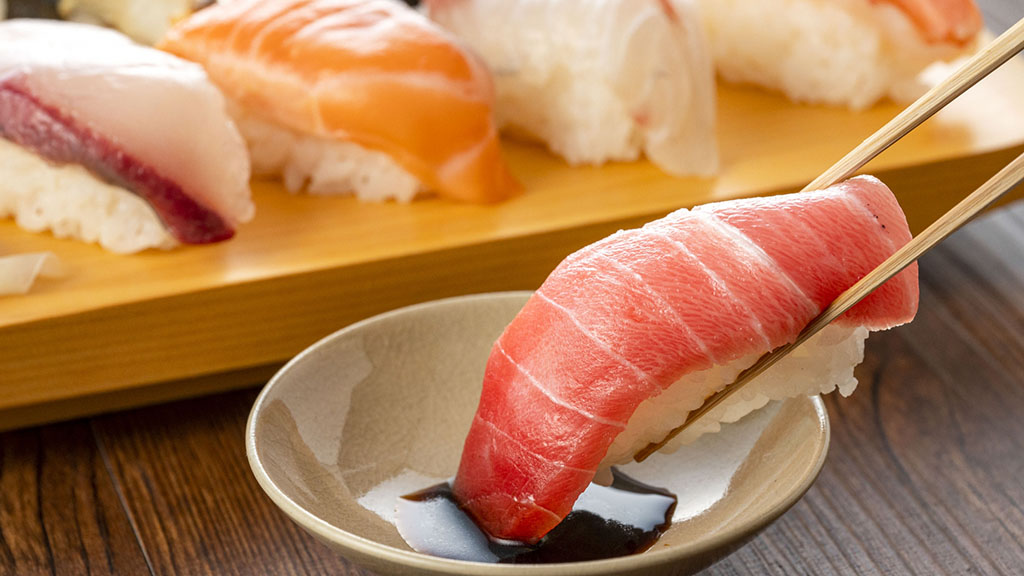 If you say Japanese food, many people will immediately think of “sushi.” There are many different types of sushi, but it generally refers to a dish in which vinegared rice (“sumeshi”/ “shari”: rice cooked and seasoned with vinegar, sugar, salt, etc.) and “neta” (main ingredients) are eaten together. These main ingredients are fresh seafood, but vegetables, meat, and eggs are also used.

These days, Sushi restaurants can also be found overseas. These seem to reflect the food culture of the country in question. On this occasion, I will introduce you to various types of sushi.

The History of Sushi

Sushi has a history of over 1200 years. This originates from preserved foods in South-East Asia, and the first incarnations of sushi were not fish eaten with vinegared rice, and it was, in fact, a high-end dish with a sour taste, due to the fish being fermented with rice and salt. “Funazushi” from Shiga Prefecture is the closest modern equivalent of sushi from this age.

During the Nara Period, the fermentation period became shorter, and the fish started to be eaten with rice. Then, during the Edo Period, a variety of sushi with vinegared rice was created.

With this kind of sushi, thinly sliced “neta” are dipped in wasabi, topped with bite-sized pieces of vinegared rice, and quickly hand-rolled and shaped. You can eat this at a variety of eateries, including high-class restaurants in which the sushi is prepared by chefs at the counter, so-called “conveyor belt sushi”, in which sushi plates are placed on a conveyor belt, and supermarkets and “bento” shops, in which the sushi is sold after being prepared in the back of the store.

If you are not keen on wasabi, you can ask them to “please remove the wasabi” when you order, or just choose sushi labeled “sabinuki”.

Sushi is made by wrapping sushi rice and ingredients in a sheet of nori (seaweed paper). This may be wrapped with vegetable leaves or a thinly baked egg, instead of nori. It may sometimes be rolled in a way that the sushi rice is on the outside.

This is bar-shaped sushi that is made by placing a sheet of nori on top of a “makisu (a bamboo sushi-rolling mat)”, spreading out the sushi rice on top of it, and placing the ingredients in the center of it. Those with many types of “neta” are Futomaki, those with one type of “neta” are hosomaki, and between these two, they are called nakamaki. Usually, it is cut into bite-size pieces, but in the case of ehomaki (naka-maki eaten on the Setsubun holiday) is not cut and is bitten into whole.

This is sushi made without; instead, wrapping the sushi rice and “neta” in nori. It is also popular as a party dish, with seaweed, sushi rice, and various “neta” laid out on the table and eaten while cooking with family and friends.

This is sushi rice wrapped in nori, with “neta” topping. This type of sushi is referred to as “Gunkan-maki” as it resembles a warship. This includes “neta” difficult to hand-rolled, such as ikura (salmon roe) and uni (sea urchin).

This is sushi where the vinegared rice topped with “neta”. This is made in a sushi “oke” or other container and served separately. Various ingredients are sometimes mixed into the sushi rice itself

As it is beautifully decorated, it is also popular as a celebratory dish for birthdays, school admissions, and other celebrations. As this can be eaten like a salad, this may be easy to eat even for those who do not like other sushi.

This is sushi made with sweet and spicy fried bean curd and vinegared rice. This is also called “O-inarisan.” Shapes vary from sandbag-shaped to triangular. Sometimes fine “neta” are mixed into the sushi rice, or it may use flipped fried tofu. This is sometimes cheaper, and is a popular dish like “O-nigiri.”

This type of sushi is made by filling a wooden frame with vinegared rice, placing the “neta” on top, and then pressing it against the rice. Saba-zushi (mackerel sushi: half a whole mackerel is used) and battera (mackerel sliced into thin strips) are the most famous types. Oshizushi may also be made with various region-specific ingredients.

There are many different types of sushi in addition to those introduced on this occasion.

For example, Chakinzushi is sushi rice wrapped in a thinly baked egg. Temarizushi is cute and popular among children, being shaped like a small ball.

Although it has the image of being a raw fish dish, there are also types of sushi that use heated “neta”, vegetables, and meat. Many people of it as being high class, but you can also enjoy sushi cheaply and casually. There are many different types, so please search for the type you like.