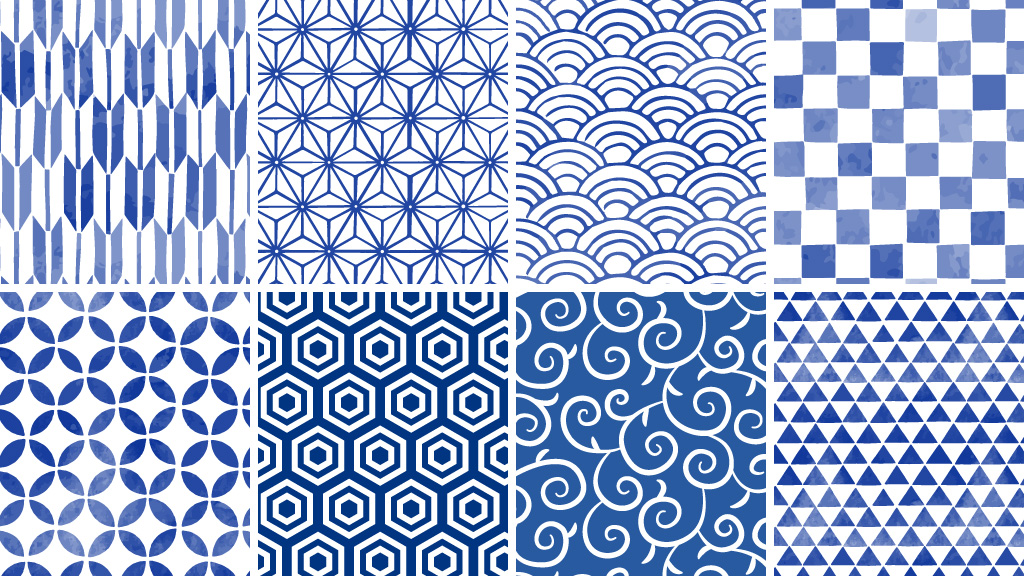 Wagara are traditional Japanese patterns. These included not only those created in Japan,, but also come from overseas with unique Japanese arrangements. Nowadays, many of us have probably seen them before because of manga and anime.

This pattern involves repeated arrow feathers. This was a very popular pattern among female students during the Taisho era. Today as well, women wearing “yagasuri-patterned kimono and hakama (formal skirt)” can be seen at graduation ceremonies at universities etc. If you fire arrows, they fly straight and do not return, so this pattern includes the prayer “be happy and never return”, and thus is often used as a bridal furniture.

This pattern connects the vertices of a regular hexagon. The name comes from the fact that it is similar to the Asa-no-ha (hemp leaf). As hemp grows quickly, and it is durable, it encompasses the prayer to “grow quickly and strongly”, and so is often used for children’s kimonos.

This pattern is a repetition of concentric circles resembling a wave. The name was inspired by an old Japanese dance song. As it is like a gentle wave that will last forever, it encompasses the prayer that “peaceful life will continue forever”.

With this pattern, squares of two different colors appear in an alternating arrangement. This is also known as Ishidatami (an area paved with flat stones). It was named after the costumes used by Kabuki actors in the Edo period. It was also used as the motif for the emblem of the Tokyo 2020 Olympic Games. As it keeps going, in an uninterrupted fashion, it encompasses a prayer for “prosperity”.

The circles are stacked 1/4 on top, bottom, left, and right. The word “Shippo (which is the Buddhist word for the seven treasures) ” was originally “Shiho (east, west, south, north) “. The circles (“en” in Japanese) continue infinitely, so this encompasses the prayer that “there will be a good relationships (also “en” in Japanese)”. It is thought that human relationships are worth as much as the seven treasures.

The pattern is made up of repeated regular hexagons. Its name comes from its resemblance to a turtle shell. As is found in the expression “Cranes live for 1000 years, turtles live for 10,000 years”, turtles are a symbol of long life, so this encompasses the prayer of “living a long life”.

This pattern consists of intertwining tendrils and vine grass leaves. From the Meiji to the Showa eras, furoshiki (cloth wrappers) with arabesque patterns became popular. These were seen in every household so, even today, illustrations of thieves often depict them carrying an arabesque-patterned furoshiki cloth. Vine grows forever, so is believed to represent life force, and this encompasses a prayer for “long-lasting prosperity.

This is a pattern in which equilateral or isosceles triangles are combined. The motif is said to represent fish or snake scales. This pattern is often used in Noh and Kabuki costumes. The triangular shape is said to ward off evil, and as the scales also serve as protection for the body, it encompasses the prayer that “misfortune and demonic things do not approach.”

The pattern has small dots arranged at equal intervals. Originally, it indicated a tie-dyed pattern of dark blue dots on a white background or white dots arranged on a dark blue background. These circles, made by tie-dyeing, are each different in color and shape. The term also refers today to regular circles printed in a variety of colors. The word “mame”(bean) also has the same pronunciation as a word meaning “to have a resilient body, to work with diligence”, and as a large number of beans can be grown from just a single bean, it also encompasses the meaning of “a prayer for good luck in business”.

“Wagara” (Japanese patterns) are not just simple patterns, but have their own names and often a meaning that encompasses a prayer. You might find it interesting to look up this information about the patterns that you find.