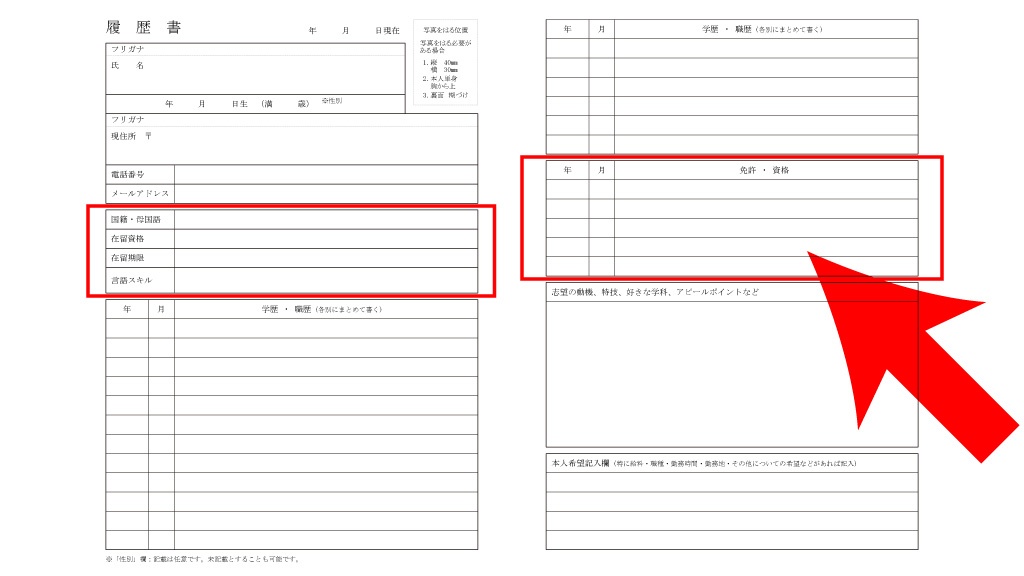 In the “RIREKISHO” required when looking for a job in Japan, there is a space for writing licenses and qualifications. This is a column for you to appeal to the particular knowledge and skills you have obtained, so please enter this carefully. On this occasion, I would like to introduce you in detail to how to describe “Licenses/qualifications”.

Further, in the RIREKISHO that can be downloaded from “Living in Japan”, there are original items for which there are no corresponding entry columns in common RIREKISHO. We shall also explain about these items.

Differences Between Licenses and Qualifications

When you obtain a license, you are permitted to perform actions that are normally restricted or prohibited. Qualifications, on the other hand, indicate that your knowledge or skill has reached a certain level.

In the first column, enter the “Year”, then the “Month”, and finally the “Content” in the final column. You can use either the Western or Japanese calendar system. Be sure to standardize the notation with other items and SHOKUMU KEIREKISHO.

What kind of licenses and qualifications should you enter

However, an ordinary vehicle driver’s license is an exception to this. Even if your desired profession seems unrelated, there is a possibility that it may suddenly become necessary in future. If you have an ordinary vehicle driver’s license, make sure you include this. Recently, the ability to use a PC is sought in all workplaces, so include any PC-related qualifications you have obtained, such as MOS.

If you have obtained multiple levels of the Japanese Language Proficiency Test (JLPT), such as N3 and N2, enter only the highest level of the test that you have passed.

There are no particular rules about the order of entering licenses and qualifications. However, it may be good to enter them in the following order to appropriately appeal to required knowledge and technical abilities.

TOEIC is neither a license nor a qualification, but if you have a good score, you can include it in this column.

In the case of TOEIC, it is not necessary to write the official name (Test of English for International Communication), and you can just write “TOEIC”. This is the same for TOEFL and IELTS. Write in an easy-to-understand way, whether it is a public test, IP test, L&R or S&W.

About “Passed” and “Acquired”

In case you do not have any licenses/qualifications

In case you do not have any licenses and qualifications, enter “特になし(Nothing in particular)” justified to the left of the column.

In the RIREKISHO that can be downloaded from “Living in Japan”, a column has been prepared to allow you to simply enter points that the company shall wish to confirm when foreigners look for employment in Japan. You can confirm these at a glance, along with the contact information, directly below “Basic Information” on the first page. If you use this template, enter the information accurately and simply.

On this occasion, we introduced you to how to describe the “Licenses/qualifications” section on RIREKISHO and the original items that can be downloaded from “Living in Japan”. These are items that can be used to objectively appeal to the knowledge and skills that you have acquired. Do not describe false information for the purpose of being hired. If the falsehood is discovered after you are hired, there is a possibility of dismissal, and this will be a problem for you more than anyone else. Enter the information accurately. Next, we shall explain how to describe the “Reason for Application” section of the Rirekisho.