The History and Basic Way of Eating Fugu 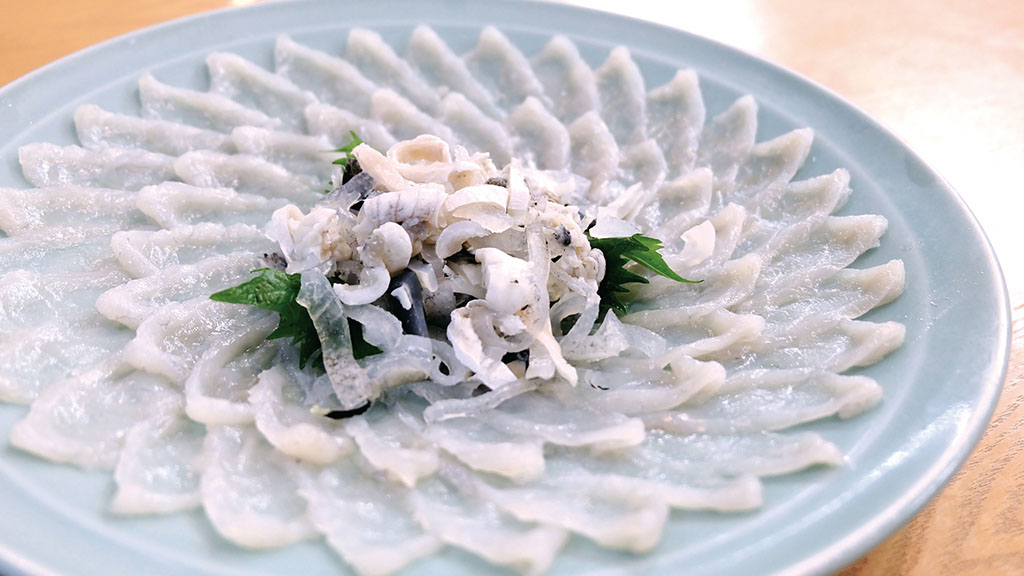 Although fugu(blowfish) is highly poisonous, there is a culture of removing poison and eating fugu in Japan. You need a specialist license for removing the poisonous elements of “Fugu”, and “Fugu” with poison removed are provided at restaurants.

Typically, if we say “Fugu”, we have the strong image of “Torafugu”, which is provided at high-class restaurants, and this is often considered a luxury ingredient. However, recently, processed items with poison removed that can be cooked at home and non-poisonous blowfish, such as “Sabafugu”, can be bought and tasted more casually. On this occasion, I would like to introduce you to “Fugu” dishes.

“Fugu” has several names, depending on the region. In the past, it was called ”Fuku”. Even today, in Shimonoseki and Kita-Kyushu, it is still called “Fuku”, as the word “Fuku” has the meaning of good fortune. Other origins of this are said to be meanings related to the appearance when the blowfish gets angry or the blowing water when searching for food.

How to eat “Fugu”

This refers to sliced fugu. In Kansai, this is also called “Tessa”. You can enjoy its light and delicate flavors and crunchy texture. “Fugu” meat is fibrous and elastic and is difficult to bite off, so it is typically sliced with a knife so thinly that you can see through it to the pattern on the plate. “Fugu sashi” is presented in a beautiful way, like cranes and chrysanthemums, so you can enjoy looking at it. Sometimes “Fugu” skin that has been slightly boiled, cooled with iced water, and then sliced, is added to “Fugu sashi”. When eating, use condiments and dip “Ponzu” sauce to taste.

This a kind of pot dish in which the “Fugu” meat and vegetables are boiled in “kombu” seaweed soup stock. In Kansai, this is also called “Tecchiri”. When eating, use condiments and dip “Ponzu” sauce to taste. When you have finished eating, you can put rice in the remaining soup to make a kind of “porridge”, and enjoy it to the final drop.

This is deep-fried “Fugu” meat. This is one of the simpler “Fugu” dishes and is something easy to challenge at home. To avoid losing the light and delicate flavors of the “Fugu”, it is recommended that you season lightly. You can squeeze lemon or “kabosu”, or sprinkle salt over this.

This is the testes of the “Fugu”. This is a high-class ingredient and is grilled with salt or made into tempura. If you grilled slowly with some distance above fire, surface becomes fragrant in a beautiful brown, and inside it feels like rich milk. If you carefully strain it and mix with Japanese sake, you get a thick mellow taste.

This is “Atsukan” (hot sake) flavored with dried and grilled “Fugu” fins. Grill the fins thoroughly on a low heat and make the sake a bit hotter. If you do not do this properly, it will smelles fishy. If you heat it a little before drinking, it will become very mellow. (Drink after the fire goes out.)

Time when “Fugu” was banned

It is said that Japanese began to eat “Fugu” from the Jomon age. However, due to the lack of knowledge of poison, there was a spate of dying. This resulted in the publication of prohibition on eating fugu by Toyotomi Hideyoshi. It is said that the samurai faced a severe punishment if caught. However, even while it was prohibited, the lower classes continued to eat it in private. In Osaka, “Fugu sashi” is called “Tessa (Teppo sashimi)”, and the “Fugu nabe” pot is called “Tecchiri (Teppo chirinabe)”, and the origin of this is the secret word using during this time. “Teppo”, meaning bullet, was used to mean something that rarely strikes, but causes death when it does. In cookery books from the Edo age, when dietary culture flourished, there are descriptions of how to remove the toxins and what condiments to use with it. In the 21st year of Meiji (1888), Hirobumi Ito lifted the ban on eating “Fugu”. And “Shunpanro” in Shimonoseki, Yamaguchi Prefecture, became the first restaurant to provide “Fugu” dishes under license., following which “Fugu” spread as food culture throughout the country.

Currently, in Japan, only 22 types of “Fugu” are allowed for food use. However, as the parts that you can eat differ depending on the “Fugu”, it is necessary to understand the type of “Fugu” and place where the poison is precisely and remove it. That is why it is necessary to be licensed as a “Fugu” expert.

If you want to prepare it at home, buy processed food from which a qualified merchant has already removed the toxic area.