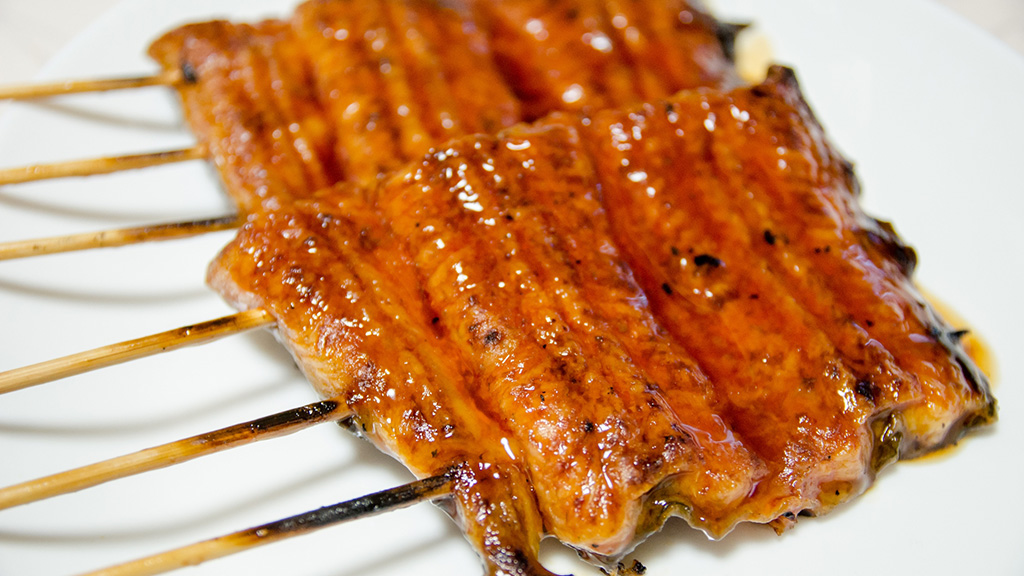 “Unagi” is loved by Japanese people. It may have been eaten from up to 1,500 years ago and appears in Waka (classic Japanese poetry with 31 syllables) from the Nara era. It has long been a much-loved part of Japanese culture as a type of food that gives you stamina. It is not generally eaten as an everyday food, but more of a luxurious “treat”.

It is rare for raw eel to be cooked by people at home. Rather, they tend to purchase ready-cooked items such as “kabayaki” and “shirayaki” (grilled) from supermarkets or fish shops.

This can also be eaten in restaurants and there are many specialist shops. In the shop curtains and signboards of specialist stores, the word “unagi” is written in hiragana characters and the character for “U” is drawn like an eel.

How to eat “Unagi”

There are also numerous other ways of preparing it, such as “Umaki”, where the “kabayaki” dipped in sauce is wrapped in egg, and “Uzaku”, where the “kabayaki” is finely chopped and cucumber is added to make a vinegar-based dish. There is also the way of eating it famous in Nagoya, where you can enjoy three ways of eating eel in a single dish, namely “eating it as is, eating it with a condiment, and pouring Japanese soup stock”.

Kabayaki differs between Kanto and Kansai

Kabayaki can mainly be divided into Kanto style and Kansai style. Appearance-wise, they are virtually the same, but the method of preparation is different. Comparing the two, you will be surprised at how different the flavor and texture are. Let us look at why they are so different and how they essentially differ.

The origins of kabayaki

Kabayaki already appears in literature from the Muromachi age. At the time, eels were pierced with a stick and baked as is. This image was similar to the ear of a bulrush (gama), so it became known as “gamayaki”, and was then distorted to become “kabayaki”.

With the dawn of the Edo period, people began to cut open the eel before cooking it, and it is thought that the difference between Kanto and Kansai styles emerged from this point.

Kanto: Cut open back and steam

The Kanto style of baking the eel is referred to as “Edoyaki”.

In Edo, there were many samurai living, and it is said that it is because they disliked “things associated with hara-kiri (disembowelment)”, that they came to cut from the back.

Also, in Edo, there was a tendency to favor food that could be provided quickly. The story is that for this reason, they prepared steamed “Shirayaki”, and were able to provide this in a short cooking time.

As it was steamed, you can enjoy a fluffy but lighter taste.

Kansai: Cut from stomach and do not steam

The Kansai style of baking the eel is referred to as “Jiyaki”.

In Kansai, there were many merchants, and it is said because they liked speaking frankly (literally “breaking the belly”), that they cut from the stomach side.

Also, the Shirayaki is not steamed, but baked, as is, after dipping it in sauce. The eel cooked in the “Jiyaki”, placed on rice and then rice placed on top of the eel again. Due to this strong baking technique, the eel is steamed by the rice, and has a very soft finish.

It has a crunchy texture, and you can really enjoy the flavor of the oils of the eel.

Does eating unagi help you beat the summer heat?

Eel is eaten the whole year round, but it is said, in particular, that “if you eat unagi during the day of the ox (hottest part of the summer), you can beat the heat”. It appears that this was a catchphrase made by Hiraga Gennai that spread during the Edo era.

It is true that unagi is effective in stimulating the appetite and aiding recovery from fatigue, making it ideal as a measure for beating the summer heat.

The days of the ox are determined by the calendar derived from China. In 2019, the day of the ox will be July 27th. Won’t you try eating unagi to help you through the hot Japanese summer?