Originating from Japan! History and Types of Braille Blocks 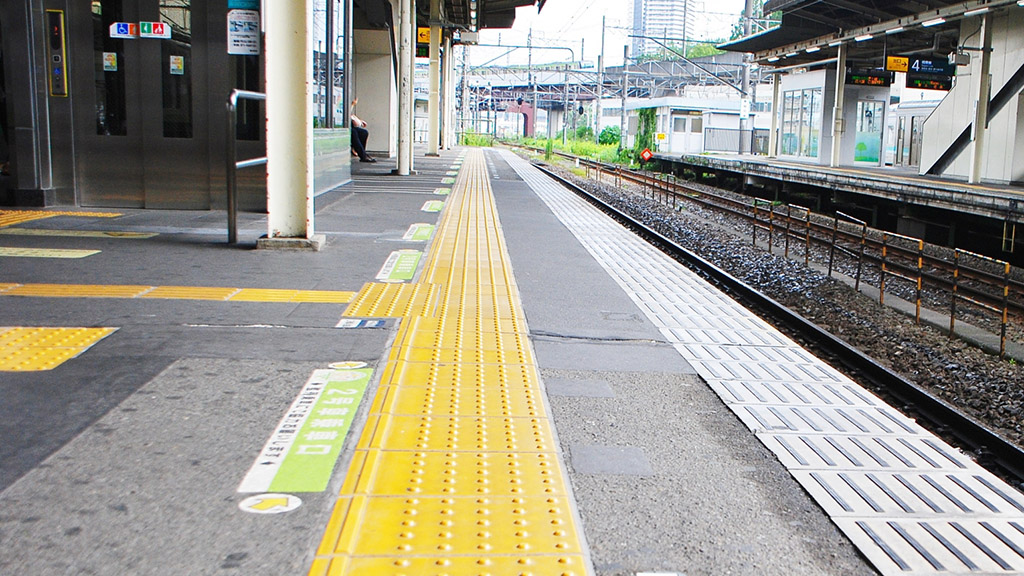 When you walk on streets, around and in stations, you notice these yellow blocks at your footsteps. Do you know what these lumpy dots and raised lines are for?

These are called “Braille Blocks.” They are assistive tools originated in Japan to support the safe walking of visually handicapped people.

What are the Braille blocks?

These blocks or plates are laid on the floor and street surface to guide safely these who are totally blind or have weak eyesight. They enable them to walk safely relying on the feelings they receive from touching blocks with their soles of feet.

The Braille blocks originated in Japan!

In 1967, the world first braille blocks were placed at the street intersection near the Okayama Prefectural School For Blinds. In 1970, JR adopted the same at Abiko Station on Hanwa Line in Osaka and this triggered the nationwide spread of the usage of braille blocks. The current international standard for the braille blocks are based on that of JIS (Japanese Industrial Standards).

The pattern and color of Braille Blocks

They are named “Braille blocks” but they don’t use actual braille letters. Two types of protrusions, points and lines, have separate meanings from each other.

The blocks with protruded points arrayed like gratings are called “dot-like blocks” and they indicate dangerous places and places to be careful of. They are usually found at such places as the edges of station platforms, stairways, before the cross-walks, guide boards and obstacles.

Dot-like blocks are installed also at the street intersections and dead-end street where a caution is required.

Protruded line shaped blocks are called “line-like blocks and indicate the directions. They guide which way to proceed.

Yellow color is often used for braille blocks so that people with weak eyesight can find where they are. Another reason is that they can easily view at night time.

The Future of Braille Blocks

The Braille blocks have to be improved further more towards the 2020 Tokyo Olympic and Paralympic Games.

There are some disparities in usage of color and ways to install Braille blocks despite the control under the JIS standard. Sometimes we see these instances where braille blocks are cut off by the manhole covers, there are some gaps, or obscure colors are used to make it difficult to recognize between roads and floors. Also aging blocks peel off, are lost, and are wearing.

The blocks are the tool to provide safety. Therefore, it is imperative to consolidate rules regarding the color, the design and the standard installation method sooner than later.

There have been some unexpected accidents which were caused by Braille blocks which are there to protect visually handicapped people. These problematic accidents include, for example, aged people or children tripping and tumbling over blocks, wheels of wheelchair catching on blocks, and the surface of blocks getting slippery by rain and freezing. The solution to these issues has been tackled.

It is not only the Braille blocks themselves that cause danger to visually handicapped people. Any obstacle left on blocks cause dangers. Please be careful not to stand or put anything on the blocks.

Parked cars or bicycles could induce very serious accidents. It is probable that a visually handicapped person may bump against a car or a bicycle or break his white cane. He may face a danger of leaving off from blocks and stepping out to roadway to avoid an annoying vehicle.