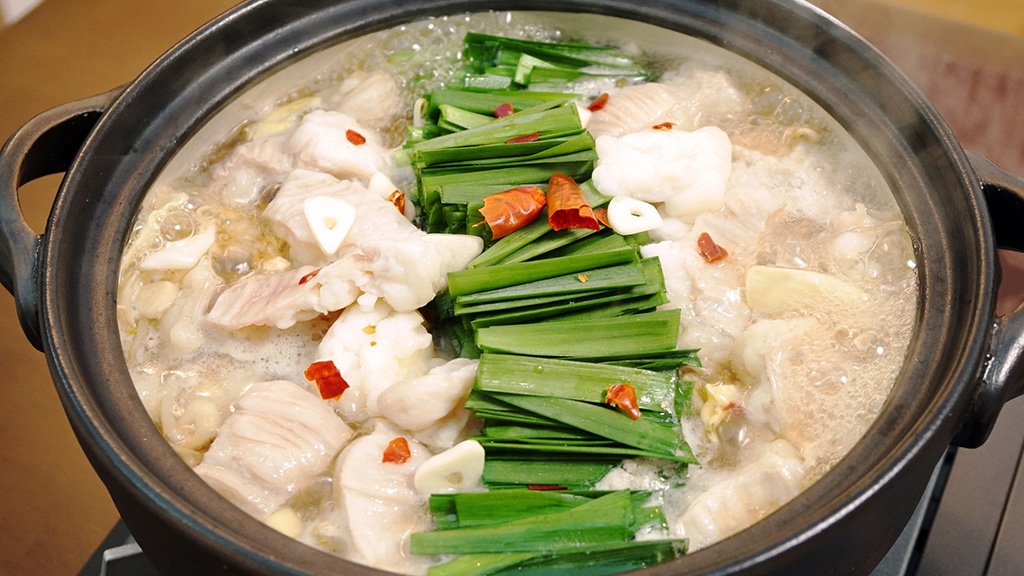 Motsu-nabe is a pot-based dish consisting of the giblets of cows and pigs, as well as vegetables. Many Japanese people, as well as foreigners, may feel resistance towards eating giblets. However, as they have a distinctive texture and add flavor to the soup, more than a few people say “you get addicted if you eat it once”. On this occasion, I will introduce you to Motsu-nabe.

Cut the pre-treated “Motsu” into easy-to-eat chunks and boil with vegetables in a soup. To prevent the vegetables diluting the flavor of the soup, use large amounts of vegetables with low water content, such as “Nira” (Chinese chives) and cabbage. You can also include garlic and chilli.

The flavor of the soup differs depending on the store or home, and may be soy sauce, salt,or miso-based. As the flavor is included to the soup itself, it can be eaten as is without adding any condiments. After you finish eating the main ingredients of the “nabe”, you can enjoy eating noodles or rice in the remaining soup.

Types of “Motsu” used in “Motsu-nabe”

There are two types of motsunabe, one is a mixture of various “Motsu” and the other is using only the small intestine. There is a wide variety of “Motsu”, and they each have difference features based on appearance and texture.

This is a part essential for “Motsu-nabe”. It is popular for its fat, which is thick and sweet, and its jiggly, soft texture. This also includes a lot of collagen.

As the fat is in a “Shima” (striped) form, it is also called “Shimacho”. It is less fatty than the small intestine, and is a part with a crunchy texture.

This is the heart. This is both hard and flexible, and is popular for its crunchy texture. It is a part that is low in fat, does not have a strong odor, and is easy to eat.

Cows have four stomachs. This is the first stomach. This is popular for its light taste and elastic texture.

This is the second stomach of the cow. As the inside of this is like a beehive (hachi-no-su), this is called “hachi-no-su”. This part also has a light taste, and is softer and easier to eat than Mino.

This is the third stomach of the cow. The meat itself does not have much taste, but it has many delicate folds, and is a part that is enjoyed for its crispy texture.

This is the fourth stomach of the cow. This is the thickest part among the four stomachs, and is enjoyed for its high-quality fats.

Hakata is the true home of Motsu-nabe

Although Motsu-nabe is eaten throughout Japan, its true home is said to be Hakata in Fukuoka Prefecture. After the second world war, people started to cook the “Motsu”, which had generally been disposed of, in aluminum pots, with “Nira” and garlic. After this, the form slowly changed, and the current style of “boiling in soup” was born.

In Hakata, there are many specialist stores for Motsu-nabe, and it is famous for being local cuisine that people want to eat in Hakata. You can also purchase set products online containing both the ingredients and the soup.

Delicious with plenty of collagen

As “Motsu” includes many different nutritional elements, it has been known since long ago as a food that builds up stamina. In particular, small intestines have a large quantity of collagen, so it is extremely popular with women. “Nira” and garlic are also ingredients that provide plenty of stamina. Motsu-nabe filled with plenty of “Motsu” with its jiggly texture and fragrant “Nira”, is a pot-based dish you will want to eat not only in cold winters, but at any time you want to build up stamina. I think that many people may feel resistance towards “Motsu”, but I would definitely recommend you try it at least once.