Which side you should stand on an escalator, right or left side 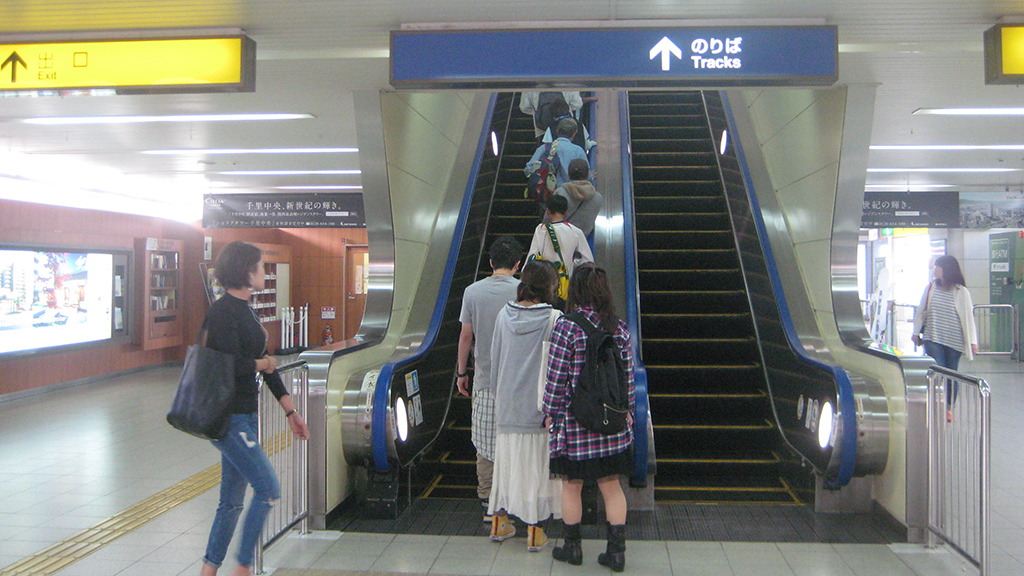 In Japan, it is often seen that people leave one side open on escalators for those who choose to walk. Which side to be left open is depends on the area. There is a tendency that people in Kanto area stand on the left side of escalators and people in Kansai area stand on the right side.  TV shows often featured on this matter a lot in the past, titling “Which do side you stand on the escalators, the right side, or the left side? Where is the boundary line to change the manner?”

However, JR-EAST (East Japan Railway Company) conducted a campaign called “Let’s hold the rails of escalators campaign”, to prevent people to walk on escalators, which provoked a discussion. JR-EAST called users’ attentions to stop leaving one side open on escalators for those who walk and stand on the escalators in two rows. Yet many users found it difficult to follow the campaign.

In the first place, many Japanese people consider the custom to leave one side open as manner to show their care for people who walk on escalators. If someone try to make two lines on escalators, other people would think ones have a bad manner. Therefore, it is hard for people to take the initiative to adopt this two-lines rule.

The reason why people cannot stand on the right, or the left side?

Escalators are produced on the assumption that people use them for standing, not walking. Escalators are not expecting users to walk on them.  If people do that, the weight will be loaded on the one side, and it could cause mechanical failure. In addition, if people lose their balance and fall while walking on escalators, it could cause accidents involving other users and crushing people who are standing.

Also, it is difficult for people with physical disabilities to obey the rules. For example, people with their left hand injured. If they try to keep the rule to stand on the left side and hold the rail, the action put them in danger.

Therefore, dangerous action of walking on escalators itself is prohibited, and they started calling for customers to use escalators making two lines and use stairs in the case they are in hurry, if no one is walking.

You might hesitate to use escalators suddenly making two lines, but please stop walking on them and use stairs when you are in hurry.

Other things you should pay your attention to:

Warnings and cautions to use escalators safely and comfortably are listed on the website of Japan Elevator Association. Unfortunately, there is only Japanese notation of them, but I would simply like to cite them for you.

In the past few years, the news and videos about accidents such as people with large baggage falling from escalators, tires of carry cases sliding and knocking out people behind them, are often seen. Therefore, you should not take big baggage with you on escalators.

Which side do you stand on elevators in your countries? The right side, or the left side? Do you make two lines? Or is there no rule at all?

What do you think about the Japanese rules for using escalators? Which side do you stand on elevators in your countries? Or are people in your countries already used to making two lines? Or It there no rule about it?

Since we are very familiar with escalators in our lives and they are quite helpful, it is difficult for us to change the way of using them after getting used to the particular way. However, it is a true face that the dangerous manner could become factors of unexpected accidents.

Please let us know if you have any episodes such as “people in my country used to stand on one side, but the rule has changed, and now we make two lines on escalators”