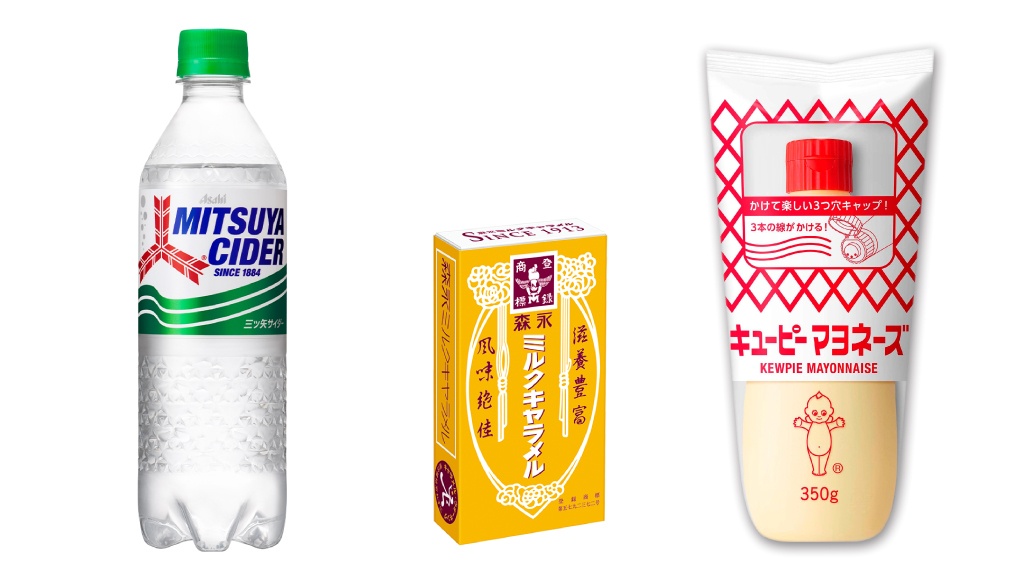 It is said that “in Japan, there are many new products and limited products”. However, there are also “long-seller” products that continue to be loved for many years. There are product that are not only deeply familiar to Japanese people, but are also loved by people overseas. On this occasion, I would like to introduce you to some food and drink products among the long seller products that continue to be loved by Japanese people. Don’t miss the chance to try them!

Mitsuya Cider is a refreshing, sweet carbonated beverage. It was first bottled and released using natural mineral water from Hirano in Hyogo Prefecture. “Mitsuya” means three arrows. This was named after a tradition passed on in Hirano, and even today, three arrows can be found on the package. Even though it is called cider, it is not “apple-based alcohol”. Carbonated water that is flavored with cider-flavored essence was released under the name of “champagne cider”, so even today carbonated beverages may be referred to as “cider” in Japan.
https://www.asahiinryo.co.jp/mitsuya-cider/sp/

Morinaga Milk Caramel is caramel that uses a milk flavor to give it just the right sweetness. This is a flavor enjoyed by Japanese people, and has been modified so that it does not melt easily in Japan with its high humidity. It has a trademark yellow box with an “angle mark” retro design. On the package, the words “JIYO HOFU” (rich nourishment) and “FUMI ZEKKA” (superb flavor) expressing the wishes of the founder are written. With its various limited edition flavors and Azuki (red bean) flavor, it is really popular.
https://www.morinaga.co.jp/caramel/

Kagome tomato ketchup is at type of ketchup that does not have a particularly American taste or Japanese taste, but has been continually loved by Japanese people for its original flavor. This has evolved as an all-purpose western condiment supporting the original development of “YOSHOKU” (western food) in Japan. It can be said that this product took the “tomato” that was unfamiliar to people in Japan at the time and developed it into the vegetable everyone knows today. Recently, it has gained attention as a secret ingredient “with low salt, that draws out the flavor”.
https://www.kagome.co.jp/products/brand/ketchup/

Kewpie mayonnaise was the first type of mayonnaise to be produced in Japan. It was released as a mayonnaise with approximately twice the amount of egg yolks as imported mayonnaise, with the aim of improving the stature of small Japanese people. As it is the egg yolk type, rather than the full egg type, it is rich. It is mellow because the particles are fine. It has two types of caps depending on the purpose. They are “Star-shaped Tip” for generous topping and “Narrow Tip” for decoration. Recently, the “three-holed Tip” for decoration used in “O-konomiyaki” are also.
https://www.kewpie.co.jp/mayonnaise/

BISCO is a snack in which cream is sandwiched by a biscuit. This was born out of a wish for children’s health in a time when nutrition was lacking. It has a trademark red box with the illustration of a “BISCO boy”. Crispy-textured biscuits have lemon-flavored cream  sandwiched, and the snack is fortified with vitamins, lactic acid bacteria, and calcium. Currently, there have been products developed targeting adults, such as those with wheat germ providing good texture, as well as rich-flavored fermented butter.
https://cp.glico.com/bisco/

Yakult is a famous lactic acid bacteria drink in Japan. The founder was studying preventative medicine, and found that the lactic acid bacteria currently known as the “Shirota strain” suppressed bad bacteria within the stomach. So he released a cheap and delicious beverage so that as many people as possible would drink it. The container has a constricted shape in the center so that both children and the elderly can easily hold it. It is now sold in 39 countries and regions, and has become a lactic acid bacteria beverage loved around the world.
https://www.yakult.co.jp/eighty_anniv/index.html

“CHAZUKE (tea poured over rice)” is a part of Japanese food culture. If you sprinkle “Ochazuke Nori” over rice, all you need to do is pour hot water over rice, and you can eat delicious “CHAZUKE”. It has a trademark package with yellow, red, black, and green stripes, reminiscent of Kabuki. In addition to standard nori (seaweed), there is also salmon, ume-boshi, cod roe and wasabi flavors. Recently, recipes for using these flavors to season fried rice and pasta have also been introduced.
https://www.nagatanien.co.jp/brand/ochaduke/