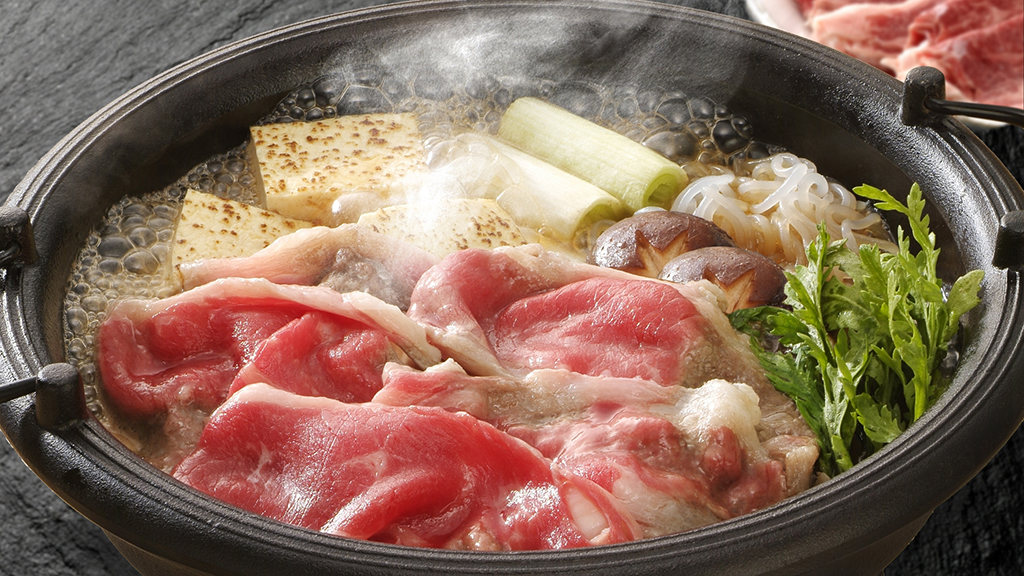 “Sukiyaki” is a type of dish served in a pot that is often eaten on special occasions, such as celebrations or when entertaining. It can be eaten at restaurants, but it can also be eaten at home, with everyone huddled around the pot. On this occasion, I would like to introduce you to “Sukiyaki”.

“Sukiyaki” is a food that you eat after baking meat, adding seasonings and vegetables and then bringing to the boil. It has a salty-sweet and rich taste. Typically, ”Sukiyaki Pot (flat steel pot)” or grill pot is heated on the table using a gas cassette cooker, and you eat while cooking. There are also hot plates that you can use as a grill pot.

Broadly speaking, “Sukiyaki” can be divided into “Kanto style” and “Kansai style”, and the method of making and taste differ. With “Kanto style”, you first make a seasoning called a “Warishita”, in which you mix sugar, soy sauce, “mirin”, and “Sake”, in advance, and then boil the meat and vegetables. With “Kansai style”, on the other hand, no “Warishita” is made, and you add flavors such as sugar and soy sauce after baking the meat, and then vegetables, before adding “Kaeshi” (a mixture of mirin, boiled to remove the alcohol, and soy sauce), as well as “Sake” and soup stock, to prevent it boiling down.As “Warishita” is commercially available, it may be easier to make Kanto-style when making Sukiyaki the first time.

Originally, “Sukiyaki” is a food from Kansai. The name is said to originate from the fact that meat is placed on the metal section known as a “Suki (farm implement for digging up earth in the shape of a scoop)” before baking and eating. On the other hand, in Kanto there is the “Gyunabe”, in which the beef and other ingredients are boiled in the “Warishita”. These are all merged and later became known as “Sukiyaki”. For this reason, the way of making it and the taste differ between Kanto style and Kansai style.

First, let’s confirm the differences between Kanto style and Kansai style through some videos.

Cut the beef into thin, easy-to-eat, sized strips. It is convenient to use meat “for Sukiyaki”, which is thinly-cut and sold in stores.

Cut the leek in slants, and cut the “Shungiku”, “Mizuna”, and white cabbage to easy-to-eat sizes. Use a peeler to peel hard vegetables, such as burdock root. Remove the butt end from the Shiitake and Enoki mushrooms, and divide them in an easy-to-eat quantity. Divide the tofu into 8 equal parts. When you boil the “Shirataki”, some foam will appear, so we recommend pre-boiling in lightly salted water in advance. If the Shirataki is not bundled, cut to approximately 15cm.

[Kanto style only] Prepare the “Warishita”

Mix together the sugar, soy sauce, “sake”, and “mirin”. You may wish to add soup stock to taste. The quantities are up to you, but it may be good to use commercially-available “Sukiyaki sauce” at first.

Bake the meat before eating

First, enjoy eating the meat. After that, you can enjoy the remainder of the meat with the vegetables.

Bake the rest of the meat, add vegetables and boil

Bake the remainder of the meat and add vegetables.

In either case, add the vegetables that take longer to cook first.

Generally, with “Sukiyaki”, you add a raw egg when eating. If you are not so keen on raw eggs, why not try half-cooked, fried eggs, or “onsen tamago” (eggs cooked in hot springs)? If you are going to eat it without adding the eggs, we recommend making the sauce a little weaker.

Just before finishing the “Sukiyaki” and just before the solid ingredients and soup completely disappear, we recommend adding pre-cooked “Udon” noodles or cooked rice.