Standard Osechi Food and its Meanings 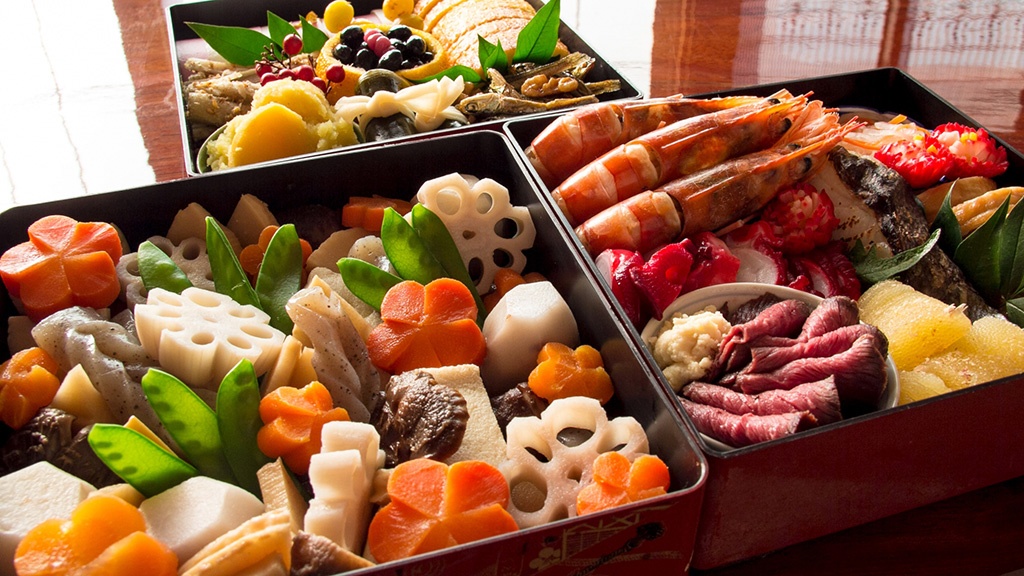 “O-sechi” is traditional food that is essential for Japanese new year. O-sechi includes a variety of Japanese traditional foods, and they are packed together in the “Jubako”. The respective dishes and ingredients include wishes, such as “praying for the health and happiness of family”. Would you like to know more about the meaning included in the various dishes and ingredients and enjoy “O-sechi” even more? Please read this together with “Japanese Culture: Origin and History of “O-sechi” food”

The meaning of “O-sechi” dishes and ingredients

The types of dishes and ingredients, number of items, and method of placing in the “Jubako”, differ based on the region and household. Originally, it is an offering to the God, so food called “Engimono” is used to express people’s wishes and congratulations. This differs by region, but “Kuromame (black beans)”, “Kazunoko (herring roe)”, and “Tazukuri” (dried young anchovies) are the basics. It is said that if you have these three items, you can call them osechi.

Sweetly boiled black soybeans. This comes from working diligently (mame) until you are black with suntan and has the meaning of “wishing for health and long life”.

This is a salted of herring roe mass. Because there are a large number of eggs, this has the meaning of “wishing for the prosperity of your descendants”.

Dried young Japanese anchovies are toasted and coated with soy sauce and sugar. When sardines were used as fertilizer for rice fields, rice was a good harvest, so this had the meaning of “praying for a good harvest of crops”.

Boiled “Gobo (burdock root)” is lightly struck with a wooden pestle and then flavored with sweet vinegar or soy sauce. As burdock has long roots under the ground, it has the meaning of “wishing for long life”.

Red and white kamaboko are cut to a thickness of approximately 1cm, and line up so there is alternate red and white. It may cut in a decorative way. As its semi-circular shape makes you imagine of the first sunrise of the year, it is said to brings good luck. There is the meaning that “red wards off evil, and white is purifying”.

Egg, “Surumi (fish paste)”, and sugar are mixed together, and baked, and rolled like an swirl. As it is similar to a scroll, it has the meaning of “wishing for academic success”.

Sweet potato or chestnuts are boiled until soft and then strained, and then flavored with sugar. When written in Kanji characters, this has the meaning of a “golden futon”, and the yellow color makes you think of the color of gold, and has the meaning of “wishing for commercial prosperity and increased monetary fortune”.

Fish, such as herrings, wrapped in konbu (kelp), tied with kanpyo (dried gourd shavings) and boiled sweet and spicy. “Konbu” is responsible with the rhyme of “Yo-ro-ko-bu (delight) “, so it is said to brings good luck. This also has the meaning of “wishing for long life and prosperity of descendants”.

Boiled “Satoimo (taro potato)” in the soup stock seasoned with soy sauce or sugar. As many small potatoes can be taken from the parent potato, this has the meaning of “wishing for prosperity of your descendants”.

“Renkon (lotus root)” are often made into boiled or vinegared dishes. They are often cut in a decorative way like a flower. As renkon have holes in them, they have the meaning of “a good outlook for the future”.

“Ebi (shrimp)” are often boiled. These have a long beard and when cooked, their rounded waist like an old person, so they have the meaning of “wishing for long life”.

“Tai (red snapper)” are often grilled with salt or “Kobujime(curing with kombu kelp)”. “Tai” is responsible with the rhyme of “Me-de-ta-i (congratulations) “, so it is said to brings good luck.

“Buri (yellowtail)” are often made into “Teriyaki” or grilled with salt. As the name for yellowtail changes for each stage as it develops, it is known as the advancing fish so has the meaning of “wishing for social success”.

Know meaning of each dish and make a wish when eating

Recently, the number of people who do not cook at home, just buy sets or just buy their favorite dishes and ingredients and pack in the “Jubako”. However, the wishes they entail have not changed.

From the end of the year to the New Year, you will see many different types of “O-sechi” food and ingredients lined up in shops. Why don’t you know the meaning of each dish and make a wish when eating “O-sechi”?