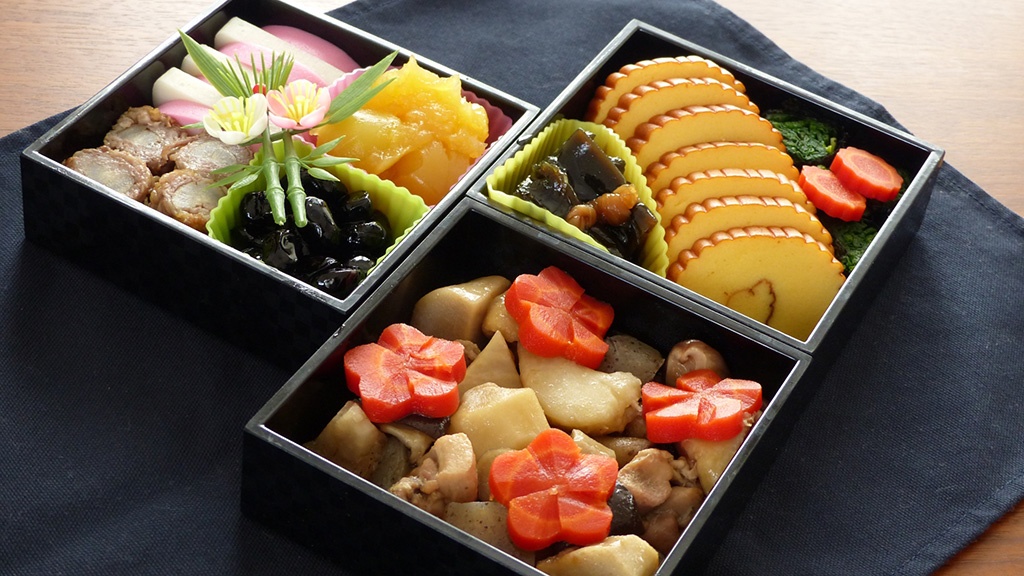 In Japan, there is the practice of eating “O-sechi” in the New Year. Various types of food are put into a box known as a “Jubako”. Bright-looking “o-sechi” is an essential food for the New Year. On this occasion, I would like to introduce you to the tradition and history of “O-sechi”.

“O-sechi” is a celebratory food eaten in Japanese homes around the New Year. Generally, different types of food are packed in a “Jubako”, which is a stack of different containers of the same shape with a lid placed only on the container at the top. Generally, this has the meaning of “layers of good luck”. Its origins come from offerings made to the gods, and foods known as “Engi-mono”, which include people’s wishes and a celebratory meaning, are used. For example, “Kazunoko (herring roe)” has a large number of eggs, so it has the meaning of wishing for “prosperity of descendants”. By eating items as offerings to the gods together with your family, this is food with which to pray for health and happiness in the coming year.

The ingredients of “O-sechi”, types of food, number of items, and manner of placing in the “Jubako” will differ depending on the region and household. Recently, there has been a greater diversity in types of “O-sechi”, with instances of Western and Chinese-style ingredients used, collaborations with famous restaurants and characters, and “Jubako” with an appropriate amount to be eaten by families with a small number of members.

Although currently known as a “New Year food”, it is, in fact, not only a New Year’s food. In the past, the celebratory food of “Sekku”, which is held 5 times a year, was called “Osechi”. Over time, this became known as the food eaten at New Year, the most important time of the year.

In the calendar system originating from the theory of Ying and Yang and the five elements in ancient China, the days that marked the milestones of the seasons were called “Setsu”, and there was a custom to get rid of evil spirits. This was transmitted to Japan, and on the day of the “Setsu”, the imperial court event was held to offer offerings to God, to  get rid of evil spirits, and to pray for immortality and longevity. This day began to be called “Sekku”.

In the Edo era, the shogunate determined the “Gosekku – 5 Sekku”, as celebratory days on which public events would be held. Currently, these are not celebratory days, but a variety of events are carried out on these seasonal milestones.

The “Gosekku”, with reference to the Chinese way of thinking, were chosen as days with the same odd number single digit, such as March 3rd and May 5th. However, as January 1st is a special day, January 7th was chosen. Additionally, the respective “Sekku” have the names of plants used to get rid of evil spirits attached.

As the food to celebrate Sekku was used as an offering to the gods, it became to be called “Osechiku”. This is the source of the word “O-sechi”. Initially, this was an official event at the royal court or shogunate, but from the latter stages of the Edo era, the tradition spread among common people as well. It then came to be known as “O-sechi” – the celebratory food eaten at New Year, which is the time to celebrate most at the beginning of the year.

From ordinary dishes to “Jubako”

“O-sechi” in the past was served on plate. However, from the end of the Edo era, the style changed and it was placed into a “Jubako”, with the meaning of “layers of good luck”. It is said that it became commonplace to use the Jubako after the end of the Second World War.

“O-sechi” was traditionally a type of food that was made in the home. At the end of the year, preparations would start for “O-sechi”. However, in recent years, it has become possible to purchase “O-sechi” through a wide range of means, such as department stores, supermarkets, convenience stores, and Internet mail-order services. It is not only boxes for single person use or families, and you can buy individual items comprising your favorite ingredients and types of food. Why not enjoy the taste of “O-sechi” as a milestone to mark this celebrating the new year once a year?