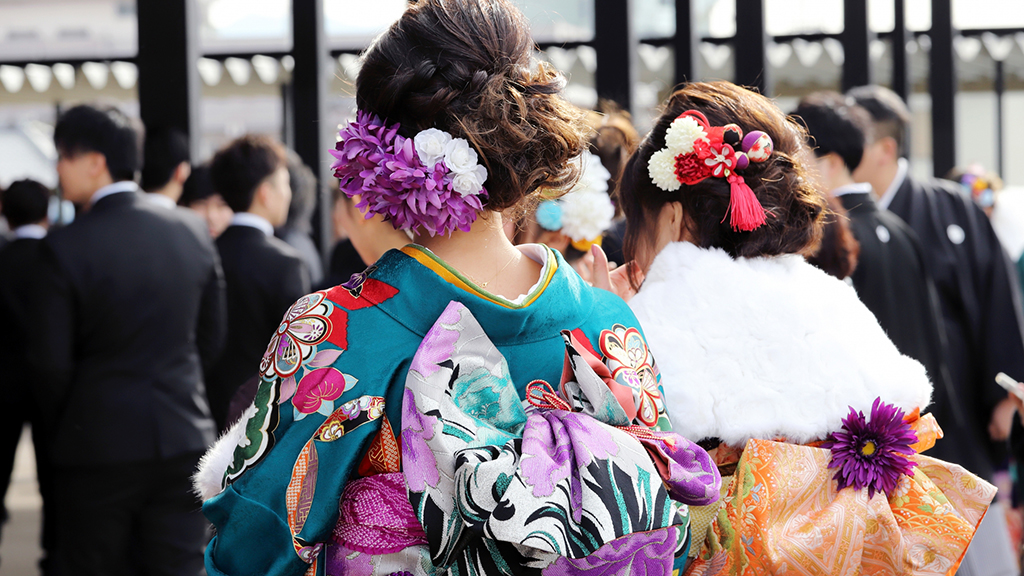 On the 2nd Monday of January every year, the “Coming-of-age day” is celebrated. The “Seijin-shiki (Japanese coming-of-age ceremony)” is held in various areas of Japan, and you can often see young women wearing “Furisode (long-sleeved kimonos)”. On this occasion, I will introduce you to the “Seijin-shiki” and “Furisode”.

This is an event for local government to celebrate and encourage “New adults”. This is generally held on “Coming-of-age day” or the previous Sunday, but in consideration of the climate and people going to universities in other prefectures, there are regions where this is held during “o-shogatsu”, spring vacation, “Golden Week” or “o-bon”. The location and content of the “Seijin-shiki” also differs greatly depending on the local government.

From ancient times in Japan, there have been a variety of rituals celebrating to reach adulthood, such as changing from children’s hairstyle and clothing to that of an adult. It is said that the present format started with the “Youth Festival” held in Saitama Prefecture after the war.

Who are the “New adults”?

Basically, the relevant people receive a guidance note or invitation from the local government where their residence is registered.

If you have moved home for educational or work purposes, but you wish to attend the place where you were previously living you should contact them in advance. You will be able to participate in most cases, but there may be some regions where you are unable to participate.

There is no strictly dress code, but the custom is to go to the ceremony in formal wear. Men usually wear a dark suit, but some people wear “Montsuki Haori Hakama (a divided or pleated skirt worn over a kimono dyed with the family crest)”. Most of women wear a “Furisode”, but some may wear “party formal” wear or a suit. Foreign nationals often wear the national costumes of their countries.

Increase in the rate of foreign nationals

Recently, the ratio of foreign nationals among new adults is increasing. It is 1 in 8 among the 23 wards of Tokyo, and it seems to have reached close to half of all adults in Shinjuku ward in particular. The age of adulthood and rituals may differ depending on the country, but according to the rule in Japan, you only have the opportunity to participate in one Coming-of-age ceremony as a new adult. You should participate if you have the chance.

In Japan, since ancient times, formal situations or such places “out of the ordinary”, such as represents festivals rituals and annual events is referred to as “Hare”. For this reason, the clothes you wear for “Hare” are called “Haregi”. “Furisode” are the highest rank of clothes worn as “Haregi” by unmarried women only.  They are extremely popular as clothes worn at “Seijin-shiki” by women, and are said to comprise about 90%.

Preparation for wearing the “Furisode”

When wearing “Furisode”, you have to visit a beauty salon to help you put on “Furisode” and hair/make-up. In the morning of the “Seijin-shiki”, the beauty salon is often fully booked, so it’s best to make a reservation early. Generally, preparation for wearing the “Furisode” starts from around two years before. You should start no later than one year in advance. When renting, there are also plans that include “Furisode”, dressing, and hair/make-up.

For those who are already married

“Furisode” are originally formal wear used only by unmarried women. However, recently, because the venues become more gorgeous if there is women wearing “Furisode”, “Furisode” may also be worn by some younger married women. It will not be a problem on the “Seijin-shiki”.