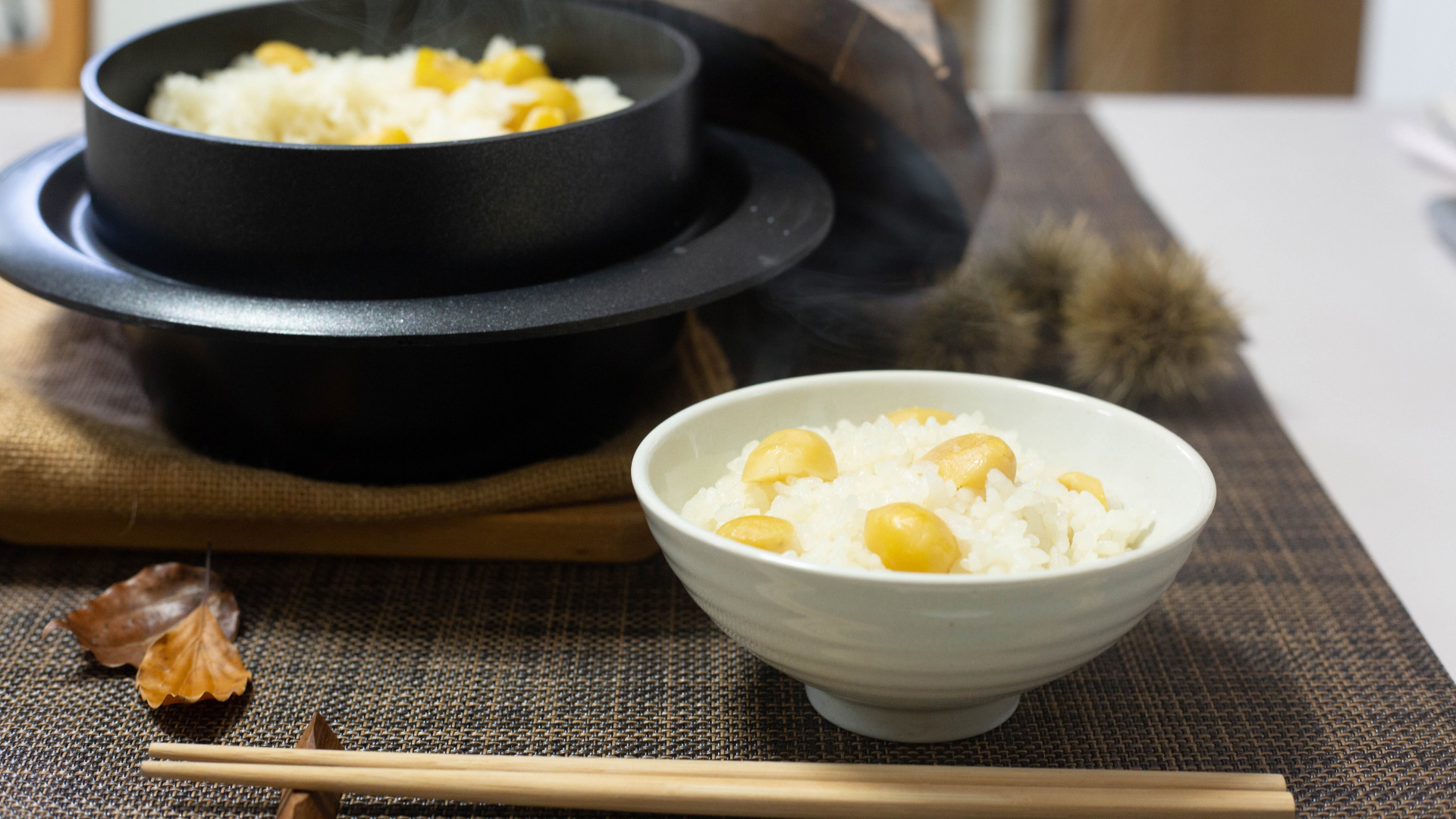 Autumn is the harvest season. A wide variety of vegetables and fruit come into season. People also tend to regain the appetite they have lost during the hot summer months. That is why there is the phrase “Shokuyoku-no-aki” in Japan (food tastes good in autumn and your appetite increases). On this occasion, we would like to introduce you to “seasonal foods” you may like to eat in autumn, as recommended by “Living in Japan”.

Japanese chestnuts are large with a strong aroma. Their sweetness grows when they ripen. We would recommend “Kuri-okowa” (steamed chestnut with mochi rice) or “Kuri-gohan” (rice and chestnuts boiled together) to enjoy the aroma and sweetness of Japanese chestnuts, as well as the freshly baked texture. Compared to Western and Chinese chestnuts, the astringent skin tends to be difficult to peel, but there are also “Shibukawani”, which are sweetly boiled still in their skins. Recently, we often see Mont Blanc and other desserts made with Japanese chestnuts. Chestnut-flavored confectionery and ice cream are also sold.

When written in kanji characters, this means “autumn blade fish”. It is a blue fish with a characteristically long and thin outward appearance like a blade. Saury in autumn are fattier with a delicious taste. It is recommended that Saury in season are eaten in a simple way as “Sanma-shioyaki (Saury baked with salt)” with grated radish, a squeeze of Kabosu or Sudachi, and a splash of soy sauce. Fresh saury can be eaten, while still alive, as sushi and sashimi. It is a fish that is also delicious broiled, fried, or marinated.

This is a highly priced food that has a rare value for being produced only in Japan. It has a distinctively strong aroma that stimulates the appetite.There is a saying “Kaori Matsutake, Aji Shimeji” (this literally means matsutake smells good and shimeji (mushrooms) taste nice). As this is type of food that you enjoy for its aroma, we recommend you enjoy it as “Matsutake-gohan” (rice and matsutake boiled in a soup), or “Dobinmushi” (soup with boiled matsutake and ginkgos). You can add “mitsuba” that also has a good fragrance, and eat with a squeeze of Kabosu or Sudachi.

Japanese sweet potatoes differ in terms of sweetness and texture, depending on the type. Broadly speaking, there is the type with a freshly baked texture and gentle sweetness, and those with a stickier texture and stronger sweetness. Recently, with the emergence of a type known as “Annoimo”, we are seeing a boom in “Mitsuimo”, that have a very high sugar content. There is a clear difference in taste when you use “yakiimo”, slowly heated. This is not only used for dessert, but also widely used in dishes such as Tempura, and boiled food.

Unlike western pears, Japanese pears are round in shape, like apples. They are characterized by a crispy texture, a refreshing sweetness and freshness. There are a wide variety of types, including the “Kosui”, with their reddish skin, and “Niju-seiki” with yellowish-green skin. The season differs depending on the type and place of origin, these can be enjoyed for a long time. Generally, these are eaten in a peeled state.

When autumn comes around, you will see rice marked as “shinmai” in the stores. The new rice is white and glossy, and has a sweet aroma. The water content is higher than normal, so you do not need to use so much water. It is also soft, so try not to use too much force when polishing the rice. In autumn, you can buy the “Shinmai Tabekurabe set”, in which a variety of types are sold in small quantities. Actually, compare the taste, and find the rice you like the best.

There are many different types of persimmons, but broadly this can be classified into “Amagaki” (sweet persimmons) and “Shibugaki” (astringent persimmons). Persimmons in season can be eaten as is, but it is necessary to perform “Shibunuki” (making sure the tannins in the persimmon do not melt in the mouth) on “Shibugaki” before eating them. This can be done using various methods. You can leave them to ripen and add alcohol. The method of performing “shibunuki” by drying them for 1 month is known as “Hoshigaki”.

Japanese pumpkin, unlike the Western variety, contains a lot of water, and is sticky. It is less sweet and does not tend to disintegrate when boiled., so is often used in boiled food and tempura. Of course, it is also used for soups, salad, and dessert in the same way as Western pumpkin.