What is Okonomiyaki? Kansai and Hiroshima Style Differences 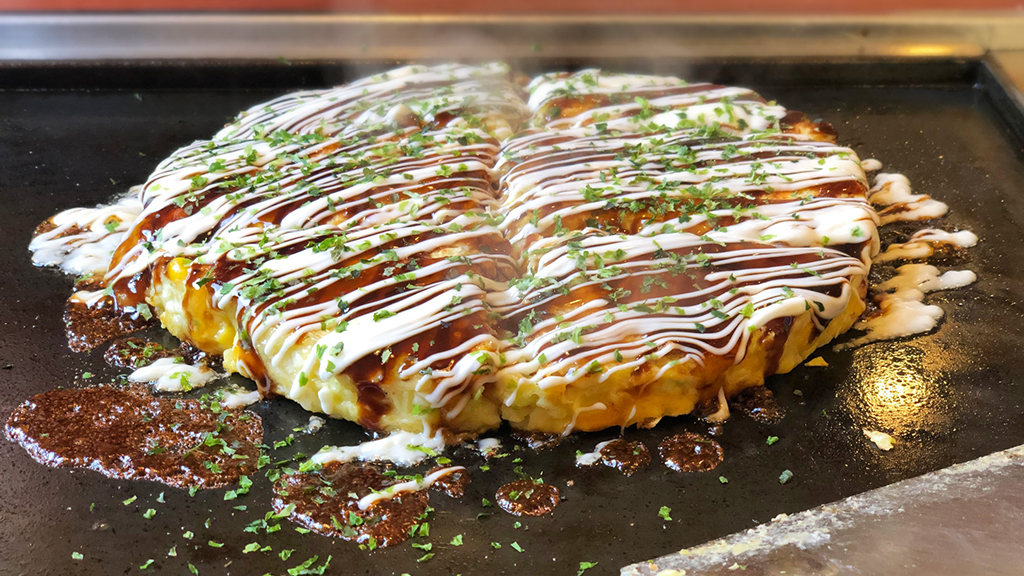 “Okonomiyaki” is a type of “Teppanyaki”, loved by everybody, from children to adults. You can purchase this at restaurants and “Yatai” stalls, and it is also made and eaten in the home. On this occasion, I would like to introduce you to “Okonomiyaki”.

Foods that use flour, such as “Takoyaki” and “Udon” are known collectively as “Konamon”. Okonomiyaki is one of these “Konamon”. This food is baked on a “Teppan” hot plate after mixing or placing the ingredients of your choice, such as meat, seafood, or vegetables in a base which is mixed flour, water and eggs. When you make this at home, you can make this on a hot plate or in the frying pan.

The origin of Okonomiyaki

There are various theories, but it seems to have its roots in “Mojiyaki”, in which sugar was mixed on to a base of flour and water and baked on a “Teppan” hot plate. This was a snack eaten by the children of Edo (Edo: currently Tokyo).  Following this, different ingredients were mixed on the Mojiyaki and this was changed to have a soy sauce flavor, becoming “Monjayaki”.

In the “Taisho” era, “Dondon-yaki” which the ratio of flour used was increased and it was eaten with a sauce, emerged. This became popular in Kansai as well, under the name “Issen-yoshoku”.

At the start of the Showa period, the main ingredient became to cabbage, and the more filling “Okonomiyaki” was born, and then it became eaten as not only just a snack but also a staple food. Okonomiyaki has different the way of cooking, the ingredients, and the name for each region. This difference is  considered to be caused by different food conditions in each region.

It is possible to make it in the frying pan, but you are less likely to fail if you make it on a hot plate. Additionally, although originally flour is used, if you use the commercially sold “Okonomiyaki flour”, there are fewer ingredients you need to prepare and it is much simpler. As long as the ingredients have a low water content, you can use virtually anything you like, but we would recommend starting with something like thinly sliced meat, such as pork back ribs. Sauce for “Okonomiyaki”  is sold commercially. It is difficult to turn Hiroshima-style “Okonomiyaki” over, so we would recommend trying Kansai-style “Okonomiyaki” first.

How to make Kansai-style Okonomiyaki

How to make Hiroshima style “Okonomiyaki”