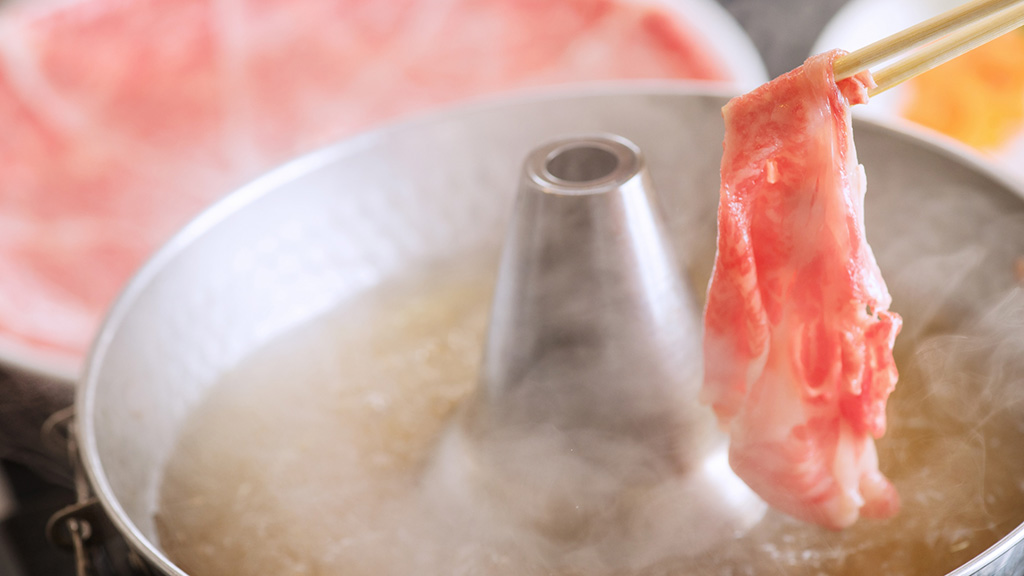 “Shabu-shabu” is a Japanese dish, a type of hotpot that is eaten on special occasions, such as when celebrating or when hosting and serving guests. You can eat it at a restaurant, but it can also be eaten in the home with everyone gathered around the pot. On this occasion, I would like to introduce you to the food known as “shabu-shabu”.

This is a type of food where you place very thinly sliced meat into the kelp-based soup and you swish the meat back and forth several times with your chopsticks, and then dip it in sauce and eat it. You also eat vegetables at the same time after cooking them.

There are similar types of food, such as “Mizutaki” and “Yosenabe”.

Although beef is most common, you can also use pork or chicken. Thinly sliced meat that have been boiled and then cooled are known as “Rei Shabu”. Seafood that is easy to cook quickly, such as thinly sliced octopus, blowfish, yellowtail, and crab etc. may also be used.

Vegetables that are easy to cook quickly, such as Chinese cabbage, beansprouts, leek, Mizuna, Shungiku, carrots, enoki mushrooms, and shimeji mushrooms etc. are used. Shiitake mushrooms and tofu are also used. Thinly sliced “mochi” rice cakes for use in “shabu-shabu” are also commercially-available.

Generally, “Ponzu shoyu” or “Gomadare” are used. Ponzu is a seasoning made by adding soy sauce to citrus fruits juice, and adjusting the flavor. “Gomadare” involves boiling and cooling soy sauce and “Mirin” (sweet cooking sake), and mixing in grated sesame or finely chopped sesame. These sauces are used not only in shabu-shabu, but also in salad etc., so it is convenient to have one bottle of each in the house.

In the case of “Ponzu”, as you like, you can put chopped leek, grated radish, grated ginger, and “Shichimi Togarashi” (a mixture of red cayenne pepper and other aromatic spice). In place of “Gomadare”, you can use a sauce in which crushed cashew nuts are added to soy sauce and soup stock.

The origin of “Shabu-shabu”

There are various theories, but a famous one states that this originates from a hot pot dish from Beijing, China, called “Shuwanyanro”. “Shuwanyanro” is a food in which thinly sliced lamb meat is placed in a soup, which is briefly heated. It is said that after being brought to Japan, lamb was replaced by beef, and the ingredients and sauce were changed to one’s favoring the Japanese tastes.

How to make it