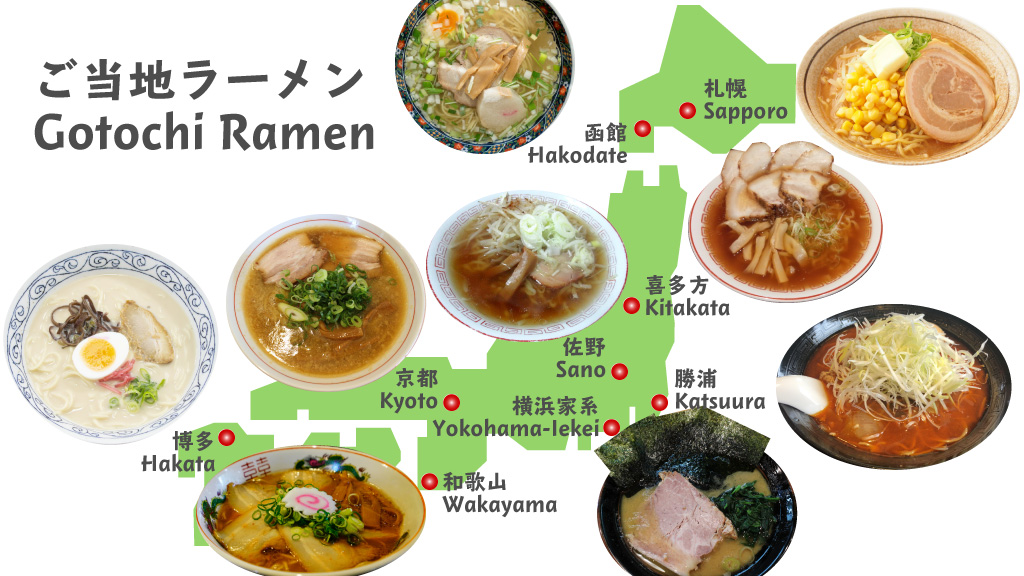 Sapporo Ramen is “Gotochi ramen” originating from Sapporo City in Hokkaido. Although it is said that Sapporo Ramen often has a thick miso flavor, typically “Shioaji” (salty taste) and soy sauce-based noodles will also be available. Curly noodles are commonly used, and this type of ramen is characterized as having a large amount of toppings, such as onion, cabbage, and bean sprouts.

Hakodate ramen is “Gotochi ramen” originating from Hakodatet City in Hokkaido. It has a light, salty taste, and classically has fine, straight noodles in clear soup. It tends to include simple toppings, such as char-siu pork, leek, and “menma” (bamboo shoots). It has a nostalgic taste and is a type of ramen that anyone would find easy to enjoy.

Kitakata ramen is “Gotochi ramen” originating from Kitakata City in Fukushima. This is known as”Hirauchi Jyukusei Takasuimen”. The main characteristic of the noodles is that they contain more water than regular noodles. The noodles are wide, flat, curled, and chewy. It is said that the soup is often soy sauce-based, but as the taste differs depending on the store, you can walk around and enjoy many different types of Kitakata ramen.

Sano ramen is a “Gotochi ramen” originating from Sano City in Tochigi. Its main characteristic is the “Aodakeuchi” noodles in which kneaded wheat is stretched with “Aodake” (green bamboo). This is boiled for only a short time, and is very chewy, giving it peculiar sensation on the tongue. The soup is transparent with a refreshing, light taste, and has no aftertaste.

Katsuura tantanmen is “Gotochi ramen” originating from Katsuura City in Chiba. Contrary to typical “tantanmen”, it includes a large amount of chili oil that stains the soy-sauce based soup a red color. This is spicy enough to make you sweat and became popular as a menu item to warm the bodies of fisherman chilled from fishing in the cold sea. It is generally topped with minced meat and chopped onion.

Yokohama iekei ramen is “Gotochi ramen” originating from Yokohama City in Kanagawa. Originally made popular mainly by “Yoshimuraya” and their apprentices, this is called “Iekei”. Characteristically, thick straight noodles are placed in a thick pig bone, soy-sauced base broth, with toppings of “nori” seaweed, char-siu pork, spinach, and white leek.

Kyoto ramen is a “Gotochi ramen” originating from Kyoto prefecture. There are various ingredients used in the soup, but whatever is used, this is characteristically thick and greasy. (The lighter ramen known as “Kyofu” is completely different.) In addition to char-siu pork and menma, many places tend to use the soft white “Kujo negi”.

Wakayama ramen is “Gotochi ramen” originating from Wakayama. Locally, this is known as “Chinese soba”. Characterized by thin, straight noodles, many places tend to boil them until they are quite soft. Both the flavor and appearance are very nostalgic, and, characteristically, many places use the Wakayama-famous Kamaboko (processed fish paste) as a topping.

Hakata ramen is a “Gotochi ramen” originating from Hakata City in Fukuoka. This is characterized by the system of “Kaedama” (second helping) of the ultra-thin noodles that go in the thick, pig bone broth. Kaedama is a system in which, once you have finished eating the ramen, you can make an additional order of just the noodles and eat these in the remaining soup. As the Hakata ramen noodles have a tendency to get softer quicker than ordinary noodles, the amount provided for one person is set to an amount that you can eat relatively quickly, and then just get more noodles later. Typically, toppings will be char-siu pork, white sesame, and red ginger.