“Katori-Senko” for the Japanese summer 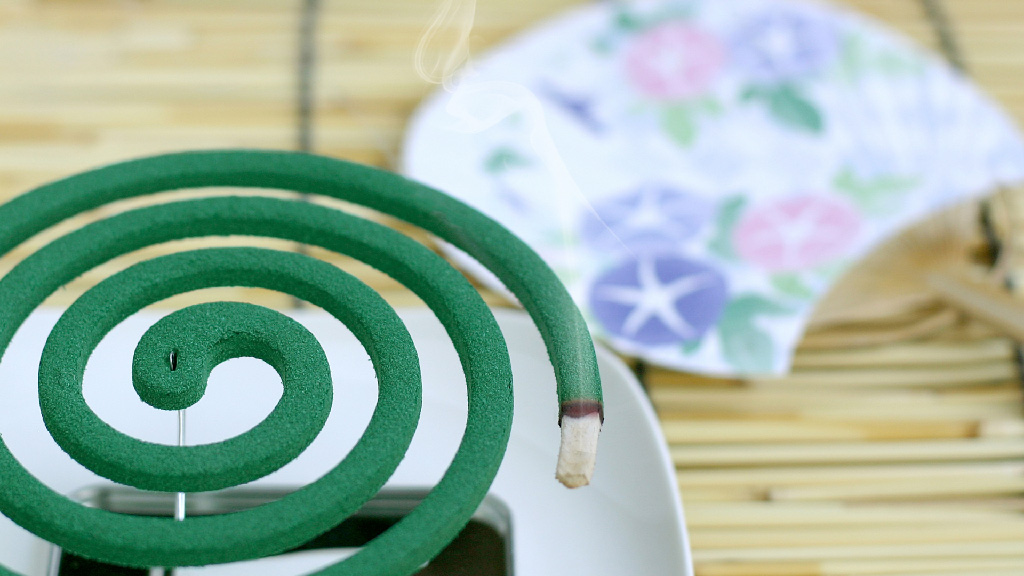 The “Katori-senko” (mosquite coil) is used around the world, but it is actually a product that originates in Japan. Recently, there are a number of different “products to protect you from mosquitoes” on the market, such as sprays and electrical types, but the popularity of the “Katori-senko” has remained.

On this occasion, I would like to introduce you to the “Katori-Senko”.

The Katori-Senko is mainly a type of insecticide used for exterminating mosquitoes. Coil-shaped incense incorporating insecticide elements, such as pyrethrum, are fixed on to a specialized incense stand, and lit to create smoke. While the Katori-senko is burning, the insecticide elements are distributed around the surrounding area, so you can spend the evening without getting bitten.

The Katori-senko has a long history, and the first Katori-senko was produced in 1890. This was bar-shaped at the time, and it only later became the coil shape we have today.

The bar-shaped Katori-senko, at 40 minutes, had a very short burning time, and as the incense sticks were very narrow, there was the problem that it was only effective when you used a large number. There was also said to be the risk that they might topple over, causing a fire.

However, by making it a coil shape, the Katori-senko can be made thick and long, and be used for a long time. As it is lain down, there is also no risk of it toppling over.

A coil-shaped Katori-senko, once lit, can be used for seven hours. There are also large-sized coils that can be used for 12 hours, miniature sizes for when you only need to use it for a short while and thick versions that are also effective against flies and striped mosquito.

The number of products is increasing, not only in terms of size, natural ingredients, and effectiveness, but also in terms of fragrance as well. Katori-senko with a wide variety of fragrances are sold, including rose, lavender, forest, citrus, and chamomile. You should try these if you are not so keen on the distinctive scent of Katori-senko. There are also products that give consideration to children and pets. These use natural ingredients, and do not use colorants or aromatic agents, so have the characteristic of being low in irritants.

How to use the Katori-senko

Although the elements of a Katori-senko are perfectly safe for humans and animals, there is a possibility of irritation due to smoke, or an allergic reaction. Make sure you use it with the window open in an area of good ventilation.

Additionally, in some buildings it is prohibited to use Katori-senko in verandas etc. Make sure you are aware of the rules just to be sure.

Choose a katori-senko holder according to your taste

When you think of a Katori-senko, you may have the image of a porcelain “Katori-buta” in the shape of a pig, but recently there are some very stylish containers.

A specialized stand and tray for the Katori-senko are placed within the pot, and it is used as is. It comes in white, black, pink, and gray colors, and as it is simple, it is perfect for use within the entrance or living room.
https://www.amazon.co.jp/dp/B00IM7C13C/

Use this for putting in Katori-senko that will not go off even if it rains. If you turn the lid and block off the oxygen, the flame will automatically go out in several minutes. The top of the main unit can be used as a stand for lighting the Katori-senko., and the lower section can be used as a storage case. It comes in silver, red, and green.
https://item.rakuten.co.jp/obaketsu/10000298/

This is not only stylish. As it is made out of aluminum, it will not chip or split. It is light so it is convenient to carry. As the Katori-senko is placed at a slant, it has a light feel. It comes in both silver and black.
https://item.rakuten.co.jp/ginga-do/rondo_slver/#rondo_slver

With the wall applied using a trowel, this is a Katori-senko holder that is like an artistic work by a plasterer. The upper layer can be used as a stand for lighting the Katori-senko., and the lower layer  can be used as a storage case. As it uses diatomaceous earth, there is no danger of it getting damp.
https://koncent.jp/?pid=62539383