A Buddhist alter (butsudan) together with a Shinto alter (kamidana) in the same household? A strange religious notion among Japanese people. 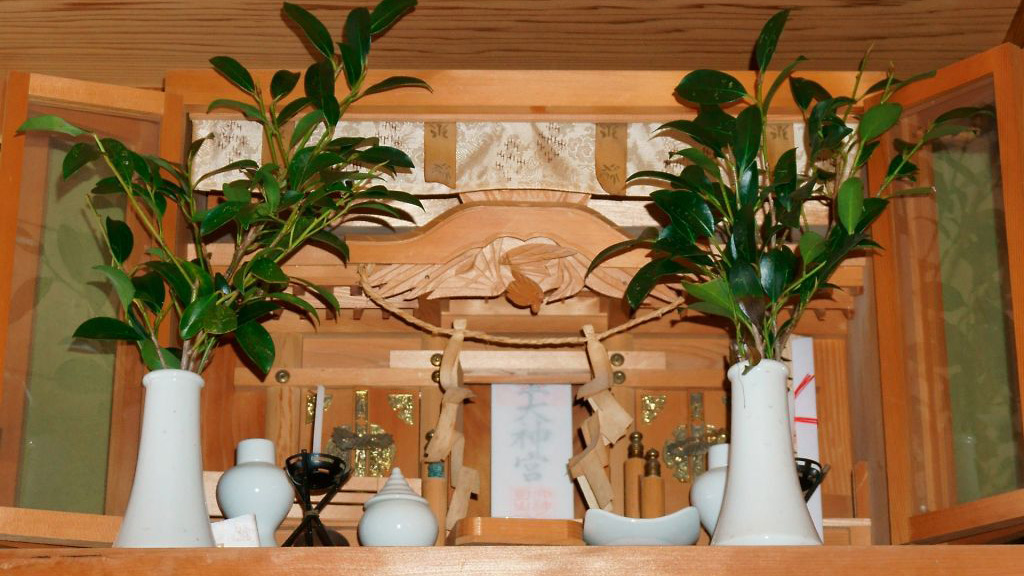 There are some households with a Buddhist and a Shinto alter together. Worshiping Buddha and God, two completely different religion, seems to be a wonder, doesn’t it? For those from a country where people believe in only one religion, it might be hard to understand the Japanese religious mindset with multiple religions co-existing.

It is rather common in Japan to pray at a Shinto alter where a Buddhist alter also is placed, and no one questions if a Christmas party is held at the same place. In Japan it has been a long time practice to pray for both Buddha and the God, very separate religions, in the same space which may not be easily accepted elsewhere. Then, why the concept of Japanese people towards religion is far different from that of other countries? We’ll explain here the meanings of Butsudan and Kamidana, and this peculiar Japanese mindset toward religion.

The meanings of Butsudan and Kamidana

This facilitates a place to pray to Buddhism at home. It imitates a temple in a miniature size so that we can pray at our own house. The main Buddha image is housed at Buddhism temples. Therefore, the purpose of Butsudan is to offer a place to pray to the deceased who are believed to have become Buddha.

Honoring our ancestors with respect, we show our gratitude that we are able to leave descendants with much prosperity. The purpose of praying differs from Buddha to God. We pray sincerely to God to ask for something, while to Buddha to show great respect and thankfulness.

There are often photographs of ancestors displayed in a Japanese room called “butsuma”, a room for Buddha, which has space fora butsudan set. The photo is there to report ancestors family events and happenings with great respect and gratitude. The butsudan is very closely fit into Japanese life style as a mean to pray and a spiritual support.

The alter—to ask for the divine favor

A kamidana is a shelf to enshrine the Shinto God. It is to be situated at a bright and clean place in your home or business with an angle higher than your eye-level, facing north or south so that a talisman faces the south or the east.  You will pray to God for sound health and safety of your family, prosperity of your business, and when you are in dire need of something.

It is not enough to have a kaminada, but you have to place a talisman which you receive from a shrine, which is considered to be the God himself. How you pray and bow to the kamidana varies from region to region and family to family. There is no set rule in this respect. The important thing is to have a spirit to worship God.

Why people pray and bow to a talisman which is thought to be a God’s tablet as if it is the God itself? There is a belief in Japan from ancient days that God dwells in everything, including trees, plants and pebble stones. Therefore, it is quite natural to worship the talisman as the God. This is the reason for this mysterious axiom unique to Japanese people.

Is it common to worship multiple Gods in Japan?

Many religions are blended into Japanese life style.

Since ancient days, the belief of animism, “a religion in which all animals, plants, and objects in the world are believed to have spirits,” have prevailed in Japan. As mentioned above, Japanese have a unique sensibility that God dwells in everything. It is recognized that God exists not only in one but in multiple forms.

This Japanese religious concept is hardly understood by people who believe in only one religion and live with it. Japanese people might live with a flexible sense toward religion just like they accept tradition and history.

More fascinating as you learn more the Japanese religious sentiment

It is not peculiar for a Japanese home to have kamidana and butsudan, where multiple religion is blended in.  It may not be considered as religious activities to celebrate Christmas in front of butsudan and to visit a shrine on the New Year’s day. Rather, these activities might be taken as a form of an entertainment for Japanese people.

We hope you have better understanding of the curious Japanese religious attitude to pray at kamidana (Shintoism) and butsudan (Buddhism) at the same time in a house. The sentiment Japanese hold towards religion could not be explained in one word and there is no simple answer. However, it seems to project more mysteriousness because of the ambiguity around this issue.

When you have an opportunity to visit a Japanese home, it will be an experience to observe kamidana and butsudan with your own eyes which will enhance your interest in Japanese culture.