The Basics of Origami 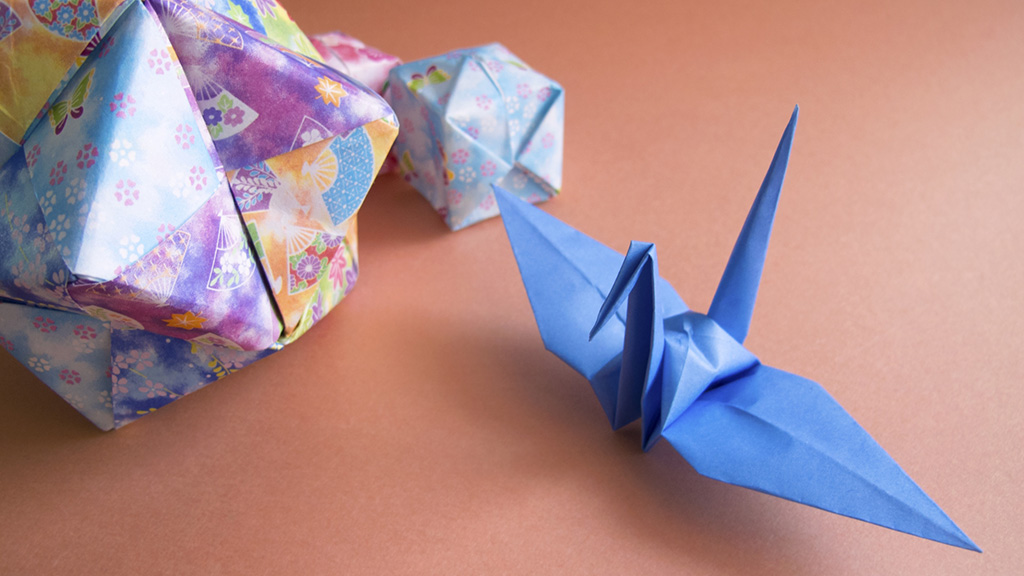 One of the Japanese words used universally is “ORIGAMI.” The word “ORIGAMI” along with its culture has spread out worldwide, although it is not indigenous culture of Japan. We introduce you the “ORIGAMI” world this time.

“Origami” is to create various figures of animals, flowers and others by folding paper. Some of them are made by cutting, pasting, coloring after folded and using plural sheets of paper. However, the fun part of origami exists in “how to create an intricate shape from folding a single sheet without snipping.” Therefore, the basic idea is to fold a single square paper using no scissor. Generally, use 10-15cm paper with one side of the paper colored, but there is no rule as to the size or material of paper.

There are two methods of origami; the “traditional style” which has been carried down from old days and the “contemporary creative style” which were developed by creators. Further, their idea and technique are applied to furniture and designing of clothing, and to industrial products such as space development.

There is a web site called “Origami Club” which shows you simple origami making by diagrams and YouTube videos. As the level of difficulty is denoted by stars, please start with the one star.
https://www.origami-club.com/

“Orizuru (paper crane)” is the most famous among Origami. Please challenge this when you are getting used to Origami.

How to fold a paper crane

The crane bird is a symbol of longevity in Japan. It is said that each time you make one paper crane, the life span is extended by one year.  As a symbol of peace, hope, bonds and repose of souls, we sometimes make and string many orizurus. This is called “Senbazuru.”

The origin of this practice is said to have arisen when Sadako Sasaki, an atomic bomb victim, who is the model of the “The Children’s Peace Monument” placed at the Hiroshima Peace Memorial Park crafted senbazuru in ‘a hope to recuperate’ from her leukemia.

Senba (one thousand cranes) means many numbers; therefore, it’s not necessary to fold one thousand cranes. Regular orizuru is used ordinarily, but when gifting someone in illness, the neck of the crane may not be bent.

You not only enjoy Origami by “folding” but have fun by making a household goods like chopstick rest and accessories like earrings. You will be able to create more decorative and Japan flavored product by using colorful Japanese paper “Chiyogami” rather than paper with one side of the paper colored.

Origami has been evolving into different works. At the end, we show you 2 craft works.